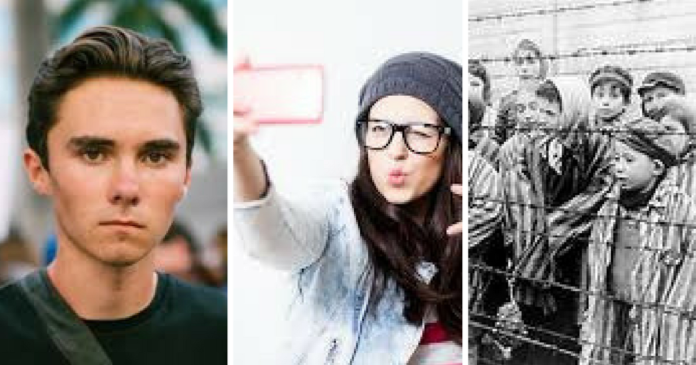 Forget about what’s happening in Washington, America’s real problem is in its schools. Millennials may be “woke” but it seems that they don’t know much about history. A study published this week found that a whopping one-fifth of Millennials aren’t sure if they’ve heard of the Holocaust.

It gets worse. 41 percent of Millennials believe less than 2 million Jews were killed. Two-thirds couldn’t identify where Auschwitz was.

“This study underscores the importance of Holocaust education in our schools,” Greg Schneider, executive vice president of the Claims Conference said in a statement. “There remain troubling gaps in Holocaust awareness while survivors are still with us; imagine when there are no longer survivors here to tell their stories.”

The survey comes as Israel honored its Holocaust Remembrance Day. 6 million Jews, about a third of the world’s population at the time, were killed during the Holocaust. Israel was established in the aftermath.

The controversy surrounding the Holocaust revived recently when Poland instituted a law criminalizing blaming the horrific deeds on Poland. U.S. officials are desperate to soothe the tension that erupted between Israel and Poland and after the law’s passage.

“The Americans made clear they don’t like the Holocaust law, think it is unacceptable and asked the Polish government to fix it. But at the same time they told us Poland is an important U.S. ally, especially in NATO, and also an Israeli ally and therefore there is a need to deal with the crisis carefully and not damage the alliance,” a source told Axios.

The last few Holocaust survivors are dying. They won’t be able to tell their stories soon. That’s partly why recent events are so worrying. America’s education system is so bad that people are forgetting about the Holocaust entirely while countries like Poland are trying to control what version of history is told.

Sir Nicholas Winton saved hundreds of Jewish children in the Holocaust, he did not tell anyone, until his wife found an album with details about all the children, they surprised him and brought all the survivors 50 years later. Watch and cry. Credit @newsner pic.twitter.com/JZIZvW7YRK