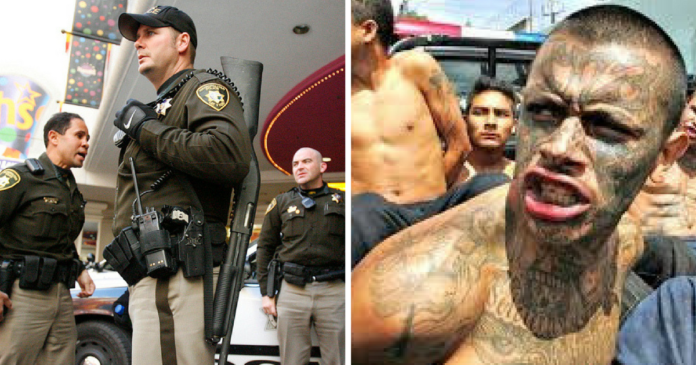 Las Vegas police led a bold attack against MS-13. Officials announced this week that five members of the vicious gang were arrested this month. The thugs were responsible for at least 10 murders.

“I do want the public to know that this investigation has been a priority for this agency for the last several months as we made connections between the victims and their killers,” Clark County Sheriff Joe Lombardo said.

MS-13 invaded the country while the liberals were fighting to make these easier for illegal immigrants. President Trump is working to correct previous administrations’ mistakes, but there are already countless gang members embedded in American cities.

“The suspects involved in these crimes are extremely violent and killed their victims over as little as identifying with another gang or participating in street-level narcotics sales,” Lombardo said.

“This has required immense dedication and hard work by our homicide detail and our gang unit… They were able to piece together a case in three months, which is a short period of time with an investigation of this magnitude.”

Las Vegas Metro police officers worked with the FBI to nab the thugs. The murders that the monsters committed over the past year were uniformly violently and bloody but it took time for investigators to link them to MS-13.

“Sometimes a weapon isn’t used again for a long period of time, so the connection might not be as obvious,” a Metro spokeswoman said.

Las Vegas residents can breathe a little easier now. The city is still infested with MS-13 gang members, but the purge has begun. Investigators believe that there about 50 active members left in the city.

President Trump focused the country’s attention on MS-13. Part of his anti-illegal immigration push was centered around kicking violent undocumented migrants out of the country.