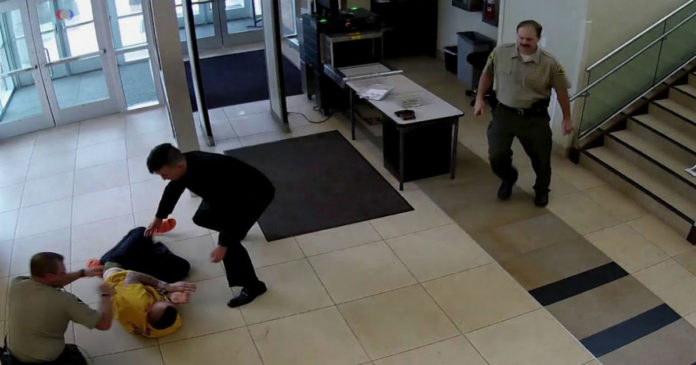 Utah security footage captured the moment a handcuffed drug defendant sprinted through the courtroom. The man headed straight toward the second-floor railing and flung himself over the edge.

Christopher Clay Rudd is a very confused man. What was he trying to do? He was handcuffed and inside a nest of law enforcement officials. If his goal was to harm himself, he barely accomplished it. He’s very much alive and is now facing serious charges.

Rudd was arrested on drug charges. His case, however, is far more critical. And now he has to deal with the fallout of his crimes while trying to recover broken leg and a fractured skull. He also injured his pelvis.

The startling footage of Rudd’s fall is already going viral.

The drug war is really ravaging the country. People are turning into idiots, their minds deteriorating as prescription and street drugs eat away at their bodies.

“Another wasted life, a chosen future of pain and suffering all because of illegal drug use. Street drugs caused all this, not prescription drugs as some would have us think.. I shattered my pelvis so I know what pain and future he faces and frankly he deserves it as he was given choices and he chose wrong, big time wrong.. Guess who pays his medical bills now?” reads an online comment about Rudd.

The U.S. is going to pay his medical bills now. However, given his criminal status and history of drug abuse, he’s not going to have a pleasant time. Now that he actually needs opioids, he won’t be able to get them.

It’s is slightly alarming how easily Rudd was able to wrestle himself away from the guards who were supposed to be watching him. If he’d had a friend waiting for him on the ground floor, he might have had a shot of getting away.