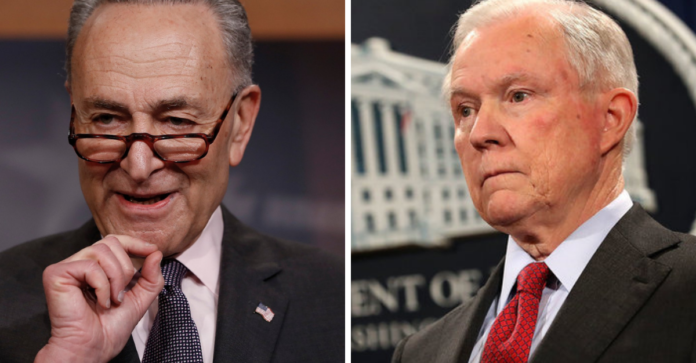 Senate Minority Leader Chuck Schumer is destined to stay in the minority for two more years, at least, but that’s not keeping him from offering advice to his fellow politicians.

Following the midterm elections, and the exchange in power that it brought, Attorney General Jeff Sessions also took his leave of the White House, tendering his resignation on Wednesday.

Sessions was often castigated by President Donald Trump for giving up his power over the special investigation into Russian collusion, which he did because of a conflict of interest.

Due to Sessions exit, Democrats are bracing themselves for the replacement, and what the new head of the Department of Justice might do to impede that investigation.

The Hill https://thehill.com/homenews/senate/415580-schumer-interfering-with-mueller-would-spark-constitutional-crisis reported that Schumer warned of a “constitutional crisis,” should the White Hosue attempt to limit the investigator, Robert Mueller.

“I’d say this: Protecting Mueller and his investigation is paramount,” Schumer told reporters during a previously scheduled press conference.

“It would create a constitutional crisis if this were a prelude to ending or greatly limiting the Mueller investigation and I hope President Trump and those he listens to will refrain from that.”

Schumer’s comments came just minutes after the attorney general announced his resignation, and the minority leader was asked many questions about the resignation.

While Democrats are limited as to how much input they have in the Republican president’s decision, the choice will still directly impact their jobs on the hill.

Among those questions, was whether or not Schumer had any requirements for the replacement attorney general.

Schumer stated that he would need to view the details of Sessions’ dismissal before he spoke to that subject.

“I’m not going to say much until I read what they said and why. I find the timing very suspect, number one,” Schumer said, before adding that any attorney general “should not be able to interfere with the Mueller investigation in any way.”