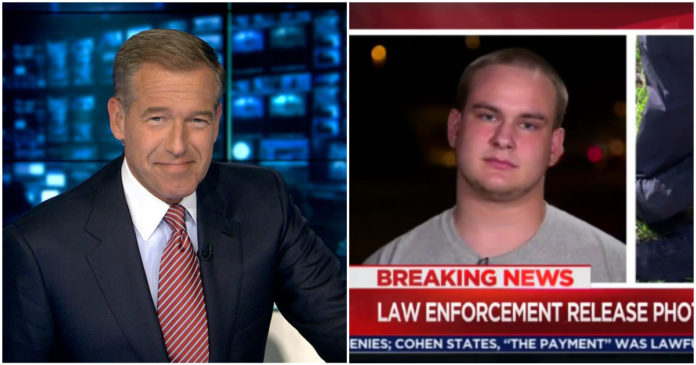 Tragically, another horrific school shooting occurred on Wednesday, leaving 17 dead. Never ones to let a tragedy go to waste, leftists are using the opportunity to push for gun control as they always do. As you’d expect, they’re ignoring crime statistics and basic facts when discussing the topic, instead, they’re appealing to emotion to convince folks of their anti-gun “arguments.”

In what can only be described as a disgusting attempt to politicize an interview with one of the school’s students, NBC’s Brian Williams tried to inject left-wing gun control narratives while talking with the student. But the clownish “journalist” didn’t get the response he hoped for.

As reported at the Daily Caller, while shamelessly pushing gun control narratives during an interview with a high school student who was at the Parkland shooting on, senior Brandon Minoff went off on Williams.

Williams thought it was a good idea to ask Minoff what recommendations he would make to lawmakers to prevent future shootings, to which the student gave a surprising response.

“If you were a lawmaker, an adult in a decision-making position, how would you stop, do you think, the kind of thing that happened today?” Williams asked. “A kid who’d been thrown out, he comes back with a weapon, and takes out whatever grievance he’s been walking around within his head.”

“Gun-wise I don’t think there’s any way to prevent it,” Minoff asserted. “You outlaw guns it just creates a higher demand for it.”

“I think it has to do with mental health, though,” he continued. “If he’s been expelled three different times from three different schools, I think he needs to be helped out.”

Williams went fishing for an anti-gun sound-bite but got shot down in embarrassing fashion. One way to shut leftists up when they start crying over guns when incidents like this occur is to ask them to give you a specific policy that would have prevented the crime.

To this question, they have no response, because like with immigration, their true agenda is to go much further than what they publicly profess. They want complete disarmament of American citizens, but they know the only way that dream can come true is via the incremental erosion of our gun rights. Give them an inch, they’ll take a mile, just look at the immigration negotiations and how Democrats ask for more more more.

The reality is that there are crazies out there willing to do heinous things no matter what laws there are. Punishing the 99.9 percent because of outliers is the height of foolishness and not something we should let the Left manipulate us into doing.