Law enforcement is pissed off about the NFL’s lingering protest.

Players claim that they’re taking a knee during performances of the national anthem because they want to fight against police brutality. Their “movement” is just a glorified Black Lives Matter rant acted out by millionaires.

Michigan State Police Director Col. Kriste Kibbey Etue said what a lot of people were thinking when she posted a scathing message on Facebook denouncing players participating in the pointless protests. 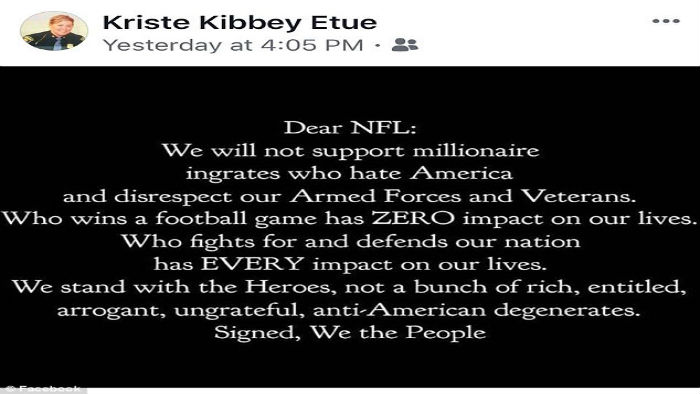 Unfortunately, Etue will be disciplined for her actions. It’s not that Michigan cops don’t agree with every word she said, the problem is that she’s not allowed to make political statements on behalf of the force. Her Facebook profile picture is a gleaming image of her in uniform.

“It was a mistake to share this message on Facebook and I sincerely apologize to anyone who was offended,” Etue apologized. “I will continue my focus on the unity at the Michigan State Police and in communities across Michigan.”

Liberals are out for blood. They want her fired, and they won’t stand for anything else.

“Etue’s words simply reflect the continued racist actions of the Michigan State Police, both in how they treat our citizens and in how their hiring demographics fail to even approach equity,” said Kenneth Reed, spokesman for the Detroit Coalition Against Police Brutality.

“There needs to be a complete overhaul of the department, and we urge the Michigan Black Caucus to call an emergency meeting to address the issue and develop a list of demands…”

A list of demands?! They sound like negotiating terrorists. Etue’s opinion wasn’t racist. Millions of Americans of all colors and creeds despise the players for protesting. Wanting professional athletes to respect their country’s flag shouldn’t be stigmatized.