I like writing about hypocrites, it’s honestly one of my favorite things. I tell myself that it’s in hopes that they will give up their hypocritical ways and become better people, but in reality, I’d be pretty down if there were no more crazy inconsistencies to write about.

The good news is, that as long as the democrats exist, I’ll have plenty of fodder for my obsession.

Case in point: Bernie Sanders is making up new things that should be an absolute right, for all humans.

Broadband access is a necessity, not a luxury. Period.https://t.co/QbDyBsNPz0

I’m a big proponent of making sure everyone is on the same page as far as the definition of words, so let me show you the dictionary definition of the word “necessity.” 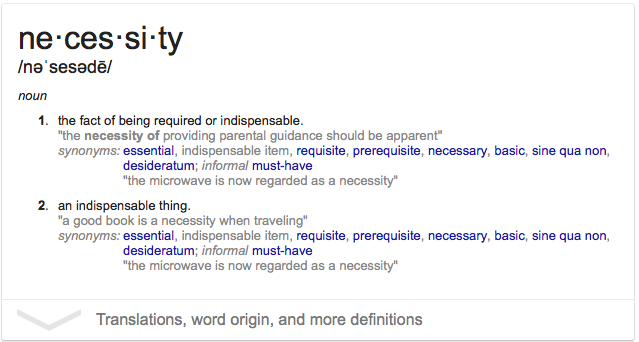 So how exactly do we fit broadband internet into that? Don’t get me wrong, I can binge Netflix while online shopping and downloading audio books with the best of them, but water is a necessity, not fast internet. He’s not even talking about the slow stuff, he’s saying we all need to have the high-speed stuff.

Thankfully, here are a few other people who agree with me:

No, it's not. Air and food are necessities. https://t.co/HClRcJ7hqQ

@SenSanders Since when did broadband become a right? What's next? Proposal for gov't to cover all utilities? Broadband is not a right! #communismSux

Amen to that hashtag.

@SenSanders Do all three of your luxury homes have broadband?

@SenSanders Then sell one of your three houses and pay for everyone's broadband.

Actually, its a luxury.

Given the taxes and fees on telecom usage, you should be happy about this. https://t.co/mzgpkeTQLu

Oh well, maybe good old Bernie would go ahead and do what people are asking of him and put his money where his mouth is and pay for some high-speed internet for middle Americans.

Hey, Bernie, my bill is due, you wanna take care of that for me? You wouldn’t want me to lose one of my basic human rights.