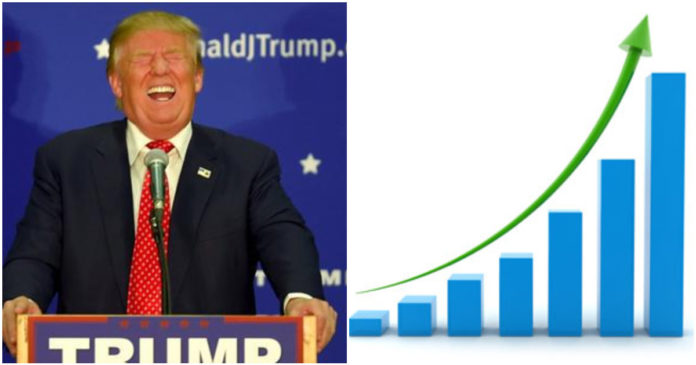 If one only consumed media from mainstream sources like the Washington Post, New York Times, or CNN, you’d probably think that Trump was a dictatorial menace that elicits zero support from the public.

Of course, you’d be egregiously wrong. The narratives spewed from the left-wing media are all about manipulating the masses into supporting their agendas, and undermining Trump at every turn is a major part of that effort. But even though the Left has near ubiquitous control of information and media in this country, they still have significant trouble convincing folks of their lies, as the president’s approval rating continues to rise the more they cry wolf about him and his agenda.

As reported at Rasmussen, despite all the media’s bluster over gun control and immigration, it appears that the public is increasingly tuning out their propaganda, as Trump’s approval rating has eclipsed the majority mark.

According to the latest Rasmussen Reports daily Presidential Tracking Poll, the president now has the approval of 50 percent of likely US voters, while only 49 percent disapprove of his performance.

This is the president’s highest job approval rating since mid-June of last year. Making this rating more impressive is the fact that President Obama on the same date during his second year in office only managed a 45 percent approval rating.

Which completely obliterates the media’s narrative about Trump being out of touch with the masses and pursuing policies that no one supports.

Even more interesting are the numbers involving gun control. Despite trotting out students involved in the Florida school shooting to manipulate the public’s emotions on the issue, most Americans still don’t believe stricter controls on guns will reduce violent crime. Nor do they trust the government to enforce the laws fairly and not abuse their subsequent power over the people.

The support for gun control sits equal with calls for better treatment options for the mentally ill as it pertains to ways to prevent such shootings. But only 32 percent believe that schools can be made safe from these types of horrific crimes.

These numbers prove that Trump is on the right track and that he should continue pursuing the agenda he laid out during the campaign. He was voted in to bring radical change, and if he wants to see his numbers to go higher, he’ll not bow to the Left’s pressure on things like guns and immigration, and continue brazenly pushing conservative reforms.