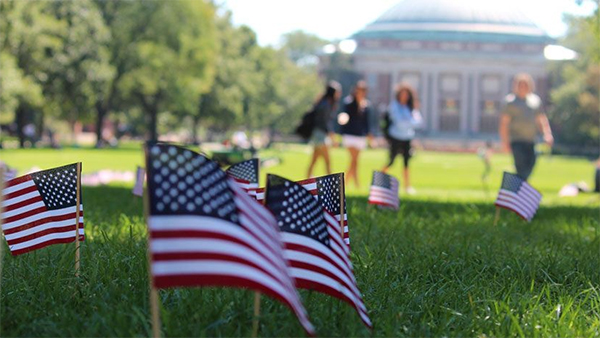 Not a ton of things offend me. Liberals, backward gun control laws, and anything considering the middle east and that’s usually it. Sure things bother me, but rarely do I see stories that truly get be twisted up into a rage quite like this one.

The University of Illinois, which my future children will now never ever attend, is contemplating banning the American flag. There have been many instances of this recently and they’ve made me mad, but the date on which they’re considering the ban is borderline inhuman. The date in question is 9/11, a date that all American’s should come together and remember how lucky we are to live in this amazing country.

The University of Illinois in Urbana Champaign this week denied the Illini College Republicans permission to place 2,977 small American flags on the campus quad in memory of each person who died that terrible day.

The memorial, also placed in 2012 on the date, consists of small flags displayed around the quad, and was very well received by students. This year, though, the University denied the request for the memorial, citing ‘irrigation’ concerns.

Luckily though, this story has a happy ending.

A member of the group tells Truth Revolt that they were able to mobilize students to make ‘hundreds of calls’ to the Chancellor’s office. A Facebook post suggesting people call in reached 10,000 engagements. The University was ‘overwhelmed’ by the response.

The flags will be placed by dozens of volunteers, most of whom were committed to placing the flags with or without the university’s blessing.

On September 11th, there will be 2,997 flags on display at the University of Illinois, remembering each person who died that tragic day. But there almost weren’t. Because of ‘irrigation.’

This warms my heart and we here at Yes I’m Right salute you, Illini College Republicans. you are true Americans and could not be a better representation of what we all stand for. God bless you and God bless the U.S.A.!