Although there is a sizable conservative base in Washington state, one of the country’s most liberal cities – Seattle – is located within its borders.

The liberals have gone so far off the reservation of sanity that they’re actively campaigning to have Washington state be a safe haven for both illegal immigrants (or as they call them, “undocumented workers) and Muslim refugees alike.

However, as liberals are apt to do, they forget or ignore the facts and concentrate on feelings. Thankfully, Donald Trump is here to shut down their feel-good drum circle with some cold hard numbers that should make every American concerned for the future of their country. 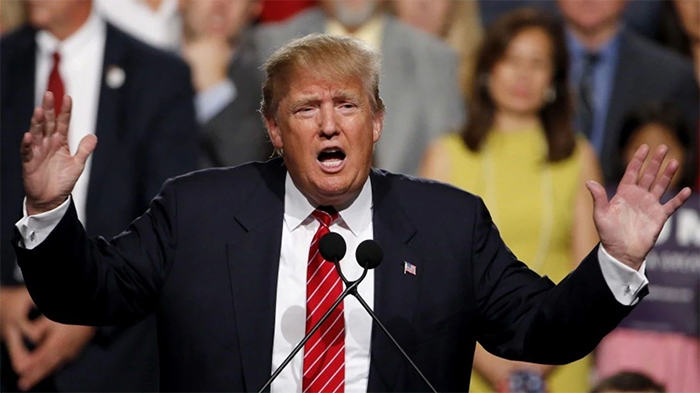 Donald Trump declared over the weekend that not only is there a large influx of refugees flooding into Washington State but that illegal immigration is costing the state’s taxpayers $2.7 billion a year.

“Illegal immigration in Washington State is costing the taxpayers, that is you, $2.7 billion a year,” Trump told a packed crowd in the northern border town of Lynden, Washington. Trump declared that the attendance was “an all time record” for the facility at the Northwest Washington fairgrounds.

The Federation for American Immigration Reform (FAIR) cites $2.7 billion as the annual cost of illegal immigration to Washington taxpayers as of 2012.

“Washington State has received a large influx of refugees. And Syrian refugees are on their way to this state,” added Trump. “These people are totally undocumented. There’s no proof. They have no paperwork. Nobody knows where the h**l they come.”

He later added, “More than 90 percent of the recent refugees from the Middle East receive welfare.”

Washington “has historically ranked as one of the top ten resettlement states in the U.S.”according to the Washington State Department of Social and Health Services. The department’s website advises that federal Supplemental Security Income (SSI) is available to post-August 22, 1996 refugee adults for up to seven years. The department’s website adds, “By becoming a citizen, an individual can maintain his/her SSI benefits and become eligible for a full range of other public benefits.”

Trump then shifted the focus to Syrian refugees and the crisis that emerged from countries adopting an open borders policy:

Trump expressed a desire to help refugees, but that bringing the refugees to America is not the solution.

“These are people that nobody knows who they are. And they’re gonna be in your community. You can’t do it,” said Trump.

“Timber, right? Do we love timber, right? Oh man, you’re whole thing is gone. Timber’s down, labor force, in Lynden, labor force, the region is 3,000 people smaller today than when [President] Obama took office.” Trump cited “a lot of bad deals being made,” as the cause.

He also pointed out the “number of timber and construction jobs has declined 20 percent in Lynden region since 2006.” Trump blamed the “leadership at the top.”

He also highlighted how “nearly one in 7 manufacturing jobs in the state of Washington has been lost.” Trump noted that Democratic frontrunner Hillary Clinton signed NAFTA saying that “it’s destroyed our country as we know it.” He further commented that jobs are moving to Mexico.

Here’s a video of the entire event:

I’m not sure what liberals are trying to do with the country, but I’m glad Donald Trump is shutting them down! Let’s make America Great Again!