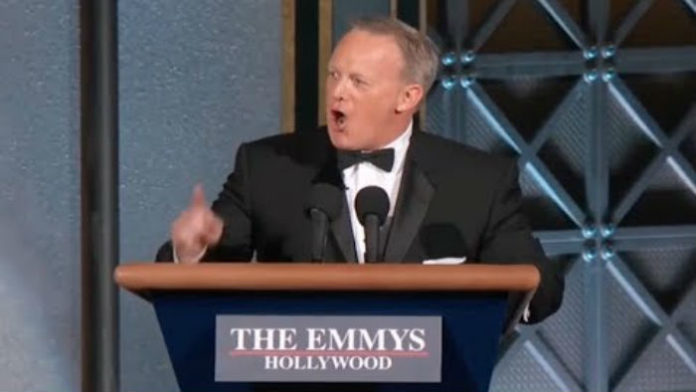 I know, it’s hard to believe. When I first saw a grinning Spicer wheeling a podium onto the Emmys stage, I thought I was looking at Melissa McCarthy. Spicer was like a whiny chihuahua when he was press secretary, lots of bark but no sustenance. He’s taking his firing in stride, however, and firing back at the president.

Spicer’s bombshell Emmys appearance occurred during a blistering attack on Donald Trump by host Stephen Colbert. The funnyman noted that Trump had previously come close to winning his own Emmy award.

“But he didn’t,” Colbert continued. “Because unlike the presidency, Emmys go to the winner of the popular vote. Where do I find the courage to tell that joke in this room? Of course, what really matters to Donald Trump is ratings. He’s got to have the big numbers, and I certainly hope we achieve that tonight.”

That proved to be the perfect set-up. “Unfortunately, at this point, we have no way of knowing how big our audience is. I mean, is there anyone who could say how big the audience is? Sean, do you know?” Colbert asked.

At that moment, Spicer came on stage. And the crowd went nuts.

“This will be the largest audience to witness an Emmys. Period. Both in person and around the world,” Spicer said, clearly satirizing his account of the President Trump’s inauguration crowd.

Spicer needs to rebrand himself, no wonder he’s appearing on frothy TV shows. Hollywood elites may have their talons out for Trump, but their views represent a tiny sliver of society. Most Americans support their president.