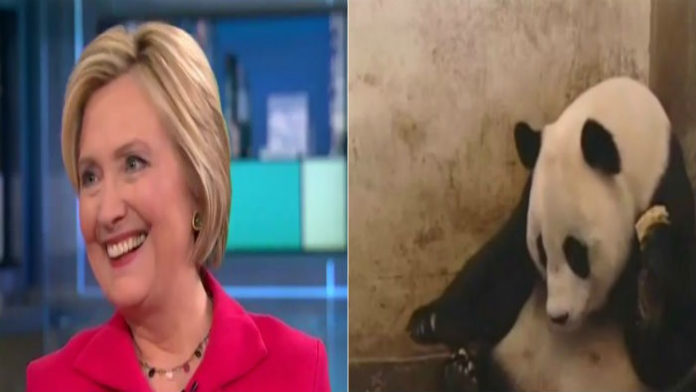 Americans are tired of Hillary Clinton. She’s currently flitting around America in a shameless self-promotion tour, trying to convince people to buy into her “woe is me” attitude.

MSNBC host Rachel Maddow is apparently less clueless than I thought because last night she aired one of the best Clinton segments that I’ve ever seen. Watch below:

That’s how little Clinton matters now. Even liberals have stopped caring about what she has to say. The slow-motion train-wreck that is Clinton’s reputation is somewhat interesting to watch but it’s getting old. Adorable pandas and their babies, however, are pretty much always worth watching.

“Madam Secretary, one of the things that you deal with in a surprisingly straightforward way in your new book is that people are obsessed with your human nature,” Maddow said after she was done airing the panda clip.

The interview at that point becomes less adorable and more pathetic.

“Pandas just live their lives,” Maddow continued, reading an excerpt from Clinton’s novel. “They eat bamboo. They play with their kids but for some reason people love watching pandas hoping for something, for anything to happen.”

Get it? Clinton’s a panda. Or something like that.

I probably would have picked a snake as her spirit animal.