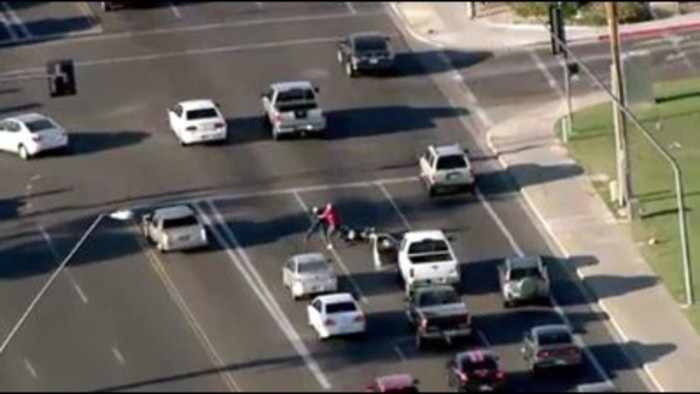 Recently, a veteran of our armed forces fought off a thug who tried to steal his motorcycle. Unfortunately, when the bike-jacker sped off in his truck, he ran over the vet’s cycle.

Well after assessing the damage, it was in a state that he needed thousands to repair it and he started an online GoFundMe campaign to raise the funds.

Here’s a video of the attack.

The story has a brillitaly happy ending though as motorcycle manufacturer Kawasaki got wind of this, found out the man was a U.S. veteran, and did the right thing. I’m holding back tears!

The man who fought off a suspect who tried to steal his motorcycle has a new ride.

Brandon Jenkins, who served in Afghanistan, was forced to defend himself earlier this month when a man being pursued by police pushed him off his bike.

Jenkins and the suspect, Joshua Monigold, struggled at the intersection of Southern Avenue and San Jose on March 24 when Monigold left the pickup he was driving and tried to take Jenkins’ motorcycle.

The weight of the truck did serious damage to his motorcycle , a GSX 600 he purchased after leaving the U.S. Army.

He set up a GoFundMe account  to help pay for a new ride, but others had different plans.

Thursday, Jenkins was presented with a new motorcycle at Kelly’s Kawasaki in Mesa.

“There was a big fear that I wasn’t going to be riding for a long time and Kawasaki stepped in and they donated me this gorgeous motorcycle,” Jenkins said.

I think I have a new favorite motorcycle company after reading about this! We salute you Mr. Jenkins, for your bravery and we salute you Kawasaki for helping out a solider of our country for his amazing self sacrifice and good deed!