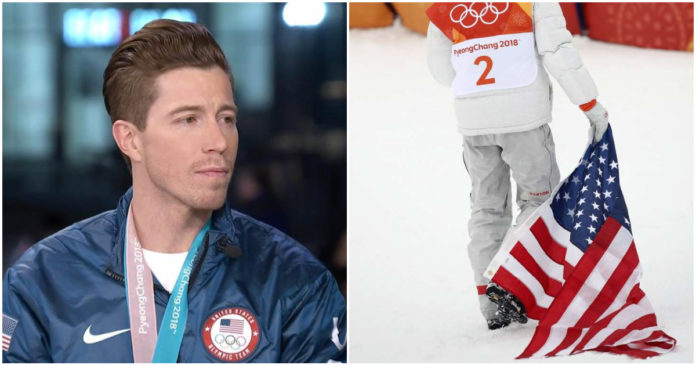 The United States’ dominance in Olympic snowboarding continued this week, as gold medals were won in both the men and women’s halfpipe competition. While the wins are great for team USA, on the men’s side, the winner Sean White came under fire for his actions during his celebration.

Immediately after it was confirmed he won, White did what most athletes do and grabbed a flag to run around with. However, while White was making the grounds, he ended up dragging the American flag around on the ground, which resulted in a deluge of outrage across social media.

As reported at NBC News, on Wednesday, White apologized for dragging the American flag in the snow after his dramatic victory, saying that he was so caught up in the moment that he didn’t realize it was touching the ground.

“I remember being handed the flag but I was trying to put my gloves on and hold the flag and get my board,” he told reporters afterward. “Honestly, if there was anything, I definitely didn’t mean any disrespect.“

“The flag that’s flying on my house right now is way up there. So sorry for that,” White continued. “But I’m definitely proud — very proud — to be a part of Team USA and being an American and to be representing for everyone back home.”

White’s victory is his third straight gold medal in the snowboarding halfpipe competition, and his latest win was the United States’ 100th all-time gold medal at the Winter Olympics.

But despite the monumental achievement, White wasn’t spared by keyboard warriors upset over his actions.

One of the harsher tweets read: “@shaunwhite way to be classy. You win the gold medal and then proceed to drag the American flag across the ground. No respect. No excuses for this.”

Another read: “@shaunwhite clearly thinks the American flag is a doormat. Have some respect kid!!! The flag isn’t a prop for your next my dew marketing campaign. #usa #flag #respect #shaunwhite #olympics #america“

While White should have been a little more cognizant, treating him like a villain over this is quite absurd. No one trashing him knows how they’d react after winning their third gold medal in such a dramatic way, so he should be given the benefit of the doubt, as he’s earned it over the years.