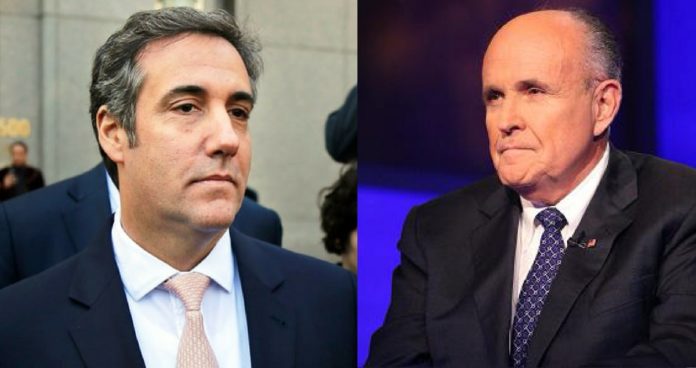 President Trump’s troubles with former attorney Michael Cohen continue, and despite the fact that things don’t look good for Cohen, President Trump’s attorneys are making sure that the media keeps their story straight.

The President has rebuked the FBI for raiding the offices, home and even hotel room of Michael Cohen in connection with the Russia collusion investigation.

Newly acquired Trump representative Rudolph Giuliani is already earning his paycheck, telling news networks that despite what they are reporting about the President and his dealings with Michael Cohen, the attorney was not wiretapped.

Giuliani destroyed NBC’s report about the Cohen wiretap, causing the network to issue an update on MSNBC saying: “Correction: Feds are monitoring, not listening to Cohen’s calls.”

“Us lawyers have talked about it, we don’t believe it’s true,” Giuliani told The Daily Beast beforehand.

“We think it’s going to turn out to be untrue because it would be totally illegal.”
Giuliani, who joined Trump’s legal team late last month, also told the Washington Post that wiretapping Cohen would be “not appropriate.”

“You mean, I call up my lawyer and the government is wiretapping him? That’s pretty damn — I mean, they’ve already eviscerated the attorney-client privilege. This would make a mockery of it.”

The narrative that the wiretap story would support is one that implies that President’s calls to Cohen were the foundation for the raid.

According to the New York Post “The former New York City mayor was ‘furious,’ when he read the report and was planning to call Trump to discuss it, according to a series of tweets by a Washington Post reporter.”

According to Giuliani, their report of the wiretap doesn’t hold water, because the President would need to have been notified by the feds if he had been “picked up” on the supposed wiretap.