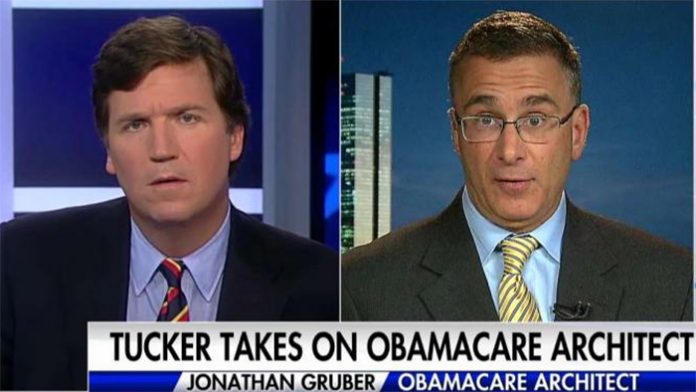 Ah, Obamacare. That was supposed to be Obama’s grand legacy. To give every American affordable healthcare. In theory, a great idea, but the execution of it was typical of every liberal policy: flawed beyond repair.

If you didn’t know, Obama promised that the premiums for the Affordable Care Act would never go up:

A promise that as we all now know, was a massive lie. Some premiums for healthcare have more than doubled. For those trying to keep food on the table, that was an unacceptable outcome. Now, many are trying to distance themselves from the terrible system.

Even the grand architect of Obamacare, Jonathan Gruber, went on live TV and admitted that the program wasn’t designed to help everyone. Wow.

Carlson had Gruber on his show to defend the Affordable Care Act and discuss plans by Republicans to repeal and replace the law.

Gruber, a professor at MIT, famously was recorded saying that a “lack of transparency” and the “stupidity of the American voter” made it easier to pass the health care law in 2010.

So not only was it a poor system, they preyed on the “stupid” American public to get it passed, even though no one wanted it in the first place.

“I thought this law was supposed to help everybody?” Carlson asked Gruber.

“This law was never supposed to help everybody,” Gruber responded. He explained that the initial design of the law was not meant to interfere with the health care of those who already had insurance. Instead the law was supposed to focus specifically on the 20 percent of Americans who did not have health insurance.

But that never happened and it was a massive failure. Now, the GOP is about to repeal it an put in place a system that should be much better for the American public. What’s more, it won’t rely on the “stupid voters” that Obamacare did.