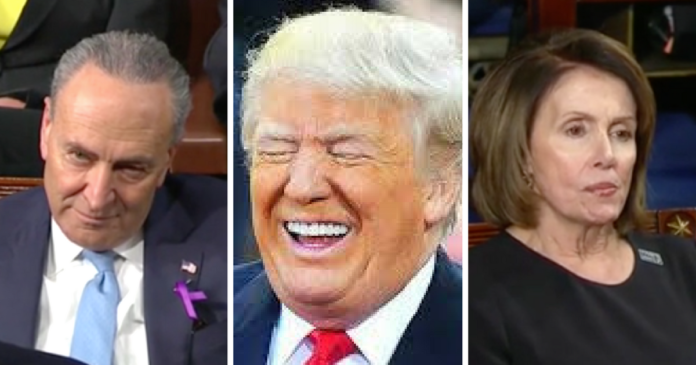 Americans love President Trump. Despite a concentrated effort by the mainstream media to portray him as a fool, his approval ratings are soaring.

The Rasmussen Reports daily Presidential Tracking Poll shows that the president ended the week strong. His approval rating on Friday was a healthy 49 percent, higher than Barack Obama’s average at this point in his presidency.

Faith in the White House was revitalized during the last State of the Union address. President Trump cut through the nonsense clouding his administration and reiterated the agenda that got him elected.

Congress passed a two-year budget plan Thursday night, ending fears that Congressional squabbles would cause another government shutdown. People are actually starting to believe that Republicans will support Trump enough for him to implement his agenda.

Half of conservative voters believe that the FBI tried to keep Trump from winning the presidency. “Thirty-four percent (34%) believe the FBI is more likely to have meddled in the 2016 election than the Russians. Fifty-five percent (55%) of Republicans feel that way.”

President Trump’s first year in office was rocky, but he succeeded. Democrats spent their days pecking at his words and hoping that he would he fail, but it never happened. Trump never stopped trusting himself, and neither did voters.

The White House has had had to deal with an extraordinary amount of drama. Yet despite the madness, Trump’s America is still a better place to live than Obama’s. Unemployment has hit record lows, corporations and investors are excited about the economy.

Rasmussen reported that Trump’s disapproval rating never went below 50 percent until last week. Voters kept their faith in him. Now that Trump is officially more popular than Obama, Democrats would be wise to abandon their anti-Trump parade.

The economy and job market are expected to continue to soar, meaning that Trump’s approval rating will likely go up likewise.