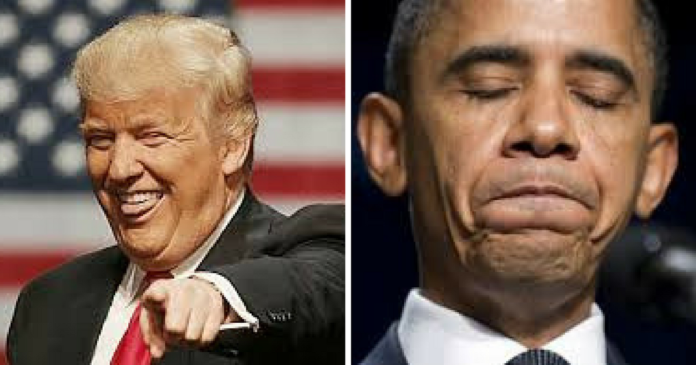 It’s unremarkable how resilient Trump’s poll numbers have been despite an unprecedented global effort to undermine him and make him seem like a corrupt tyrant. There’s been a never-ending supply of fake news and hit pieces against Trump from day one, as leftists across the nation have refused to give him a chance. Instead, they’re hoping he fails and makes the country worse, all so they can swoop in an regain power.

It’s been a masterful display of anti-Americanism, and it won’t’ be stopping anytime soon. However, despite the news disseminating propaganda 24/7, Trump continues to see his approval rating climb. What makes his numbers even more amusing is how they compare with the unprecedentedly worshiped Obama at the same juncture in his presidency.

As reported at Rasmussen, the latest Rasmussen Reports daily Presidential Tracking Poll for Tuesday shows that 50 percent of Likely US voters approve of President Trump’s job performance, while 48 percent disapprove.

At this point in time, President Obama held a 43 percent approval rating, placing him 7 points back of the much-maligned Trump.

The latest numbers show that 35 percent Strongly Approve of the way the president is performing while 39 percent Strongly Disapprove. This gives him a Presidential Approval Index rating of -4, which is better than last week’s.

The latest survey also asked some questions about gun control. It appears that most Americans still believe the disproven idea that violent video games and movies make the nation a more violent place. However, on 13 percent think that limiting violence on screen and in games would reduce shootings like the one in Florida.

Forty-one percent believe stricter gun control laws would do the most to reduce the number of mass murders, while 40 percent believe addressing mental health would be the most prudent course of action.

Still, it seems that Americans aren’t convinced that stricter gun laws would reduce crime and that the government can’t be trusted to enforce such laws in the first place.

Despite the insane amount of gun control propaganda being pushed right now, most Americans who have guns at home say it makes them feel safer.

Needless to say, Trump’s numbers don’t reflect the narrative being spewed by the left-wing media. His support is actually growing in spite of the fact so many forces are moving against him. So what should be taken away from this is that you simply cannot believe the garbage you see on television and the internet, as it’s just leftists screaming louder than everyone else, making it seem like they have more support than they actually do.