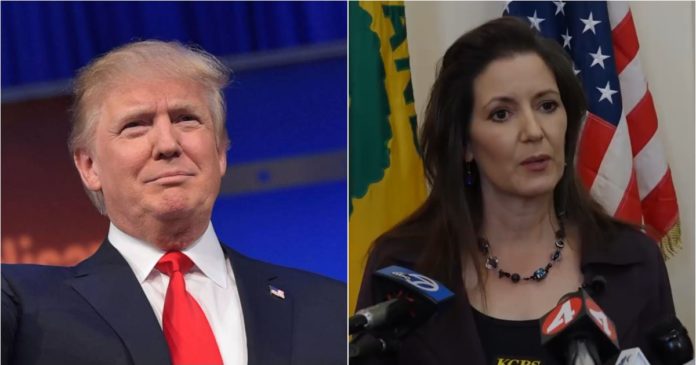 Schaaf violated her role as a public official last week and warned Oakland residents of an upcoming ICE raid. Agents had hoped to nab at least 1,000 illegal immigrants. Because of Schaaf’s interference, they didn’t even capture 200.

“Many of them, they say 85 percent of them, were criminals and had criminal records,” Trump said.

“This was long in the planning, and she said, ‘Get out of here.’ And she’s telling that to criminals. And it’s certainly something that we’re looking at, with respect to her individually,” Trump added.

Mayor Schaaf put the lives of dozens of federal agents at risk. She took privileged information and shared it with the world. She should be thrown in jail. She doesn’t have the right to interfere a federal mission and not face consequences.

“Her actions support those who flout the law and boldly validate illegality,” Attorney General Jeff Sessions said during a speech in Sacramento this week.

“There’s no other way to interpret those remarks… Here’s my message to Mayor Schaaf: How dare you? How dare you needlessly endanger the lives of law enforcement officers to promote your radical open borders agenda?”

The Justice Department sued California over its immigration policies Tuesday. Attitudes like Schaaf’s can’t be allowed to run rampant. The entire country is endangered because of California’s ultra-lax attitude toward illegal immigrants.

“Immigration law is the province of the federal government. It’s in the Constitution,” Sessions said.

“I don’t want to be in this position of having to challenge these laws. It wasn’t something I chose to do, but I can’t sit by idly while the lawful authorities of federal officers are being blocked by legislative actions and politicians.”