Just when it seemed that Hillary Clinton had begun slithering into the hole of obscurity she was dragged back into the spotlight by the continued investigation into her crimes. The State Department is now inquiring into Clinton’s supposed mishandling of classified information while she was Secretary of State. Crooked Hillary and her cronies are at risk of having their security clearances yanked.

Clinton’s November loss humiliated the Democrats. She botched her opportunity to become president by running an incompetent and ineffective campaign. Media outlets spent more time covering her past misdeeds as a politician than any of her proposed policies. 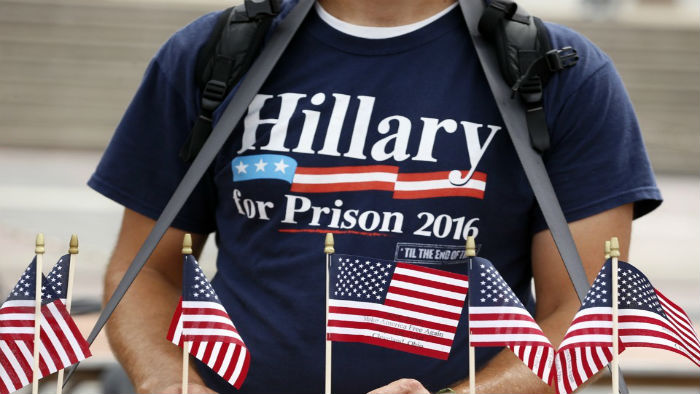 After his victory, President Trump was gracious enough to extend an olive branch to his failed opponent. Justice, however, seems to be treating Clinton less liberally. She likely thought she was safe after former FBI Director James Comey bungled the investigation into her crimes.

According to Fox News: “The department’s investigation aims to determine whether Clinton and her closest aides violated government protocols by using her private server to receive, hold and transmit classified and top-secret government documents. The department declined to say when its inquiry began, but it follows the conclusion of the FBI’s probe into the matter, which did not result in any actions being taken against Clinton or any of her aides.”

If Clinton had managed to trick more Americans into voting for her we would have a sitting president that was under investigation by the State Department. The mania surrounding the Russia investigation is overblown and based on anonymous hearsay. The investigation into Clinton’s careless handling of state secrets meanwhile is bolstered by actual facts.

“There is no better evidence that when it comes to Hillary Clinton and her côtèrie — laws are for the little people,” Judicial Watch’s Chris Farrel told Fox News.

Democrats are trying to beguile to the public with stories of alleged White House collusion with Russia in order to hide the glaring blemishes marring their party. There’s a reason that Americans chanted “lock her up!” while Clinton was still a candidate. She’s a criminal.