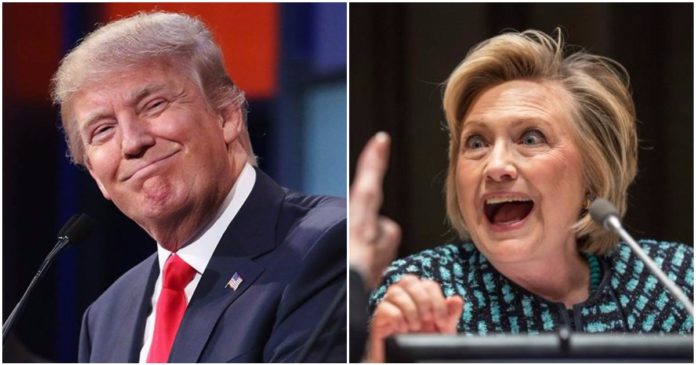 During the election last year, Trump was constantly accused of making things up and trying to damage Clinton with the claims that she had rigged her own primary. The media and Clinton alike all dismissed the claims as preposterous, and even tried to make it seem like Trump was crazy to suggest such a thing. But here we are, a year later, and we now have the former head of the DNC and top Democrats openly admitting that the Democratic primary was indeed rigged in Hillary’s favor.

As reported at the New York Post, in response to these damning admissions, Trump went on a furious tweetstorm Friday suggesting that the FBI should “do what is right and proper” and investigate Hillary Clinton.

“Crooked Hillary bought the DNC & then stole the Democratic Primary from Crazy Bernie!” he railed. “The real story on Collusion is in Donna B’s new book.”

The book in question is Donna Brazile’s, who was the interim DNC head last year. In her new book that supposedly gives an insiders view of what happened, and she says she found evidence that Clinton entered into an agreement with the DNC and other involved parties in 2015 to rig the primary. She was sure to add that she didn’t think any laws were broken, but that the agreement “looked unethical.”

On top of urging an FBI investigation, Trump also tweeted about the many other scandals Clinton and the DNC are embroiled in.

“New Donna B book says she paid for and stole the Dem Primary. What about the deleted E-mails, Uranium, Podesta, the Server, plus, plus,” Trump continued.

These scandals have been buried by the media. There’s been an egregious silence from the media and the FBI alike, as they’ve refused to comment on the nature of these highly suspect deals. While the Left tries to convince the public Trump colluded with Russia, it’s a fact that the Clinton campaign paid for Russian intelligence that was part of the Trump dossier.

On top of that, Clinton and Obama just so happened to sell uranium of all things to the Russians in a corrupt business deal that screams of illegality. Then there’s the dynamic duo of Tony and John Podesta, who have been Clinton lackeys for decades and involved in all sorts of shady stuff.

“People are angry. At some point, the Justice Department, and the FBI must do what is right and proper. The American public deserves it!” he wrote.

“Everybody is asking why the Justice Department (and FBI) isn’t looking into all of the dishonesty going on with Crooked Hillary & the Dems.”

If the FBI has the time and desire to investigate Trump, then there’s no reason Clinton shouldn’t also be investigated. At this point, there’s no excuse whatsoever. The folks at the FBI should understand that if they ever want to earn back the public’s trust, they should start equally applying the law to both the Right and the Left instead of protecting their Clinton masters.