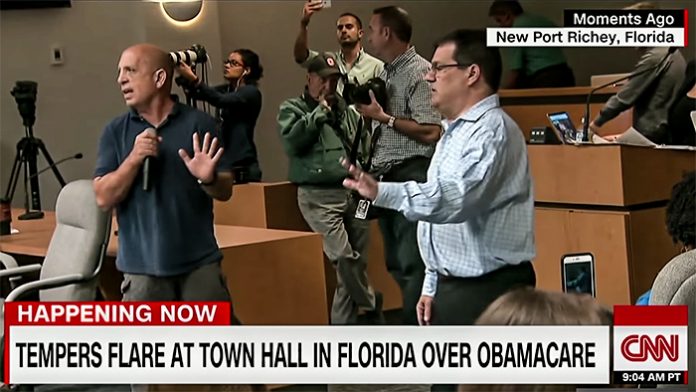 A town hall meeting in New Port Richey Florida was punctuated with one man’s cries to “rip Obamacare to shreds.” This from Pete Franco, 61, of South Pasadena.

The pleas came after liberal constituents appealed that lawmakers should “call it whatever you want, but we need affordable healthcare.” Watch the clip below.

All of this controversy took place at a town hall organized by Rep. Gus Bilirakis (R) of Florida who wants to replace Obamacare because its costs have skyrocketed.  The opposition that he encountered has, thankfully, not prompted a change of heart on his opposition to the health law.

The Tampa Bay Times reported one attendee to the “listening event” as saying:

It’s unclear if Bilirakisthe liberal constituents are uninformed or just short sighted, but it appears as if they are more concerned with having their yearly exams covered than whether they are letting a flood of terrorist take up residence within our borders.

Thankfully the voice of reason seems to be prevailing in Florida this time around.