According to reports, an Oklahoma school just passed a law that allows teachers to open carry while on school grounds in light of mass school shootings that have been happening during the Obama administration’s tenure.

Liberals of course are furious, and conservatives are rejoicing that someone finally is standing up to Obama and his gun law BS. 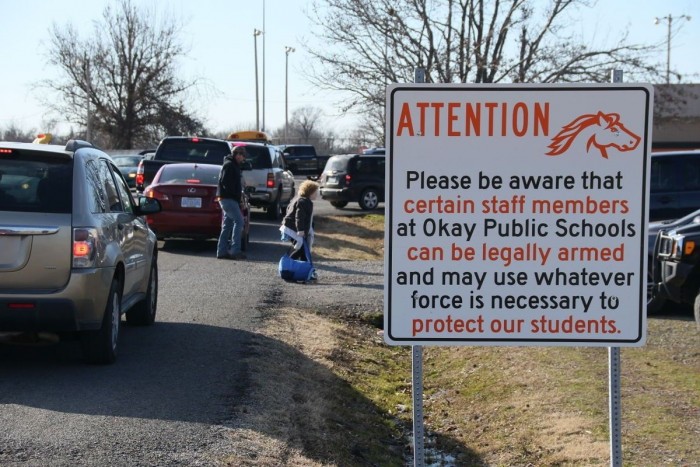 A small sign in one Oklahoma town gives a big warning.
The sign outside the Okay Public Schools building says: “Please be aware that certain staff members at Okay Public Schools can be legally armed…and may use whatever force is necessary to protect our students.”
Last year, lawmakers passed a law allowing certain school employees to carry guns. Some parents say it makes them feel better about sending their children to school.
“I think it’s great. I mean it really gives me a peace of mind. with issues at school. You know I’m not really worried. much and I really have faith in our school system,” says parent Jody Fulton.

Anyone with a brain know that this is a wonderful idea and keeps all students and faculty at this school markedly safer. Let’s hope more and more schools and places of business follow this shining example of Patriotism and safety. We salute you!
(Source: KJRH)