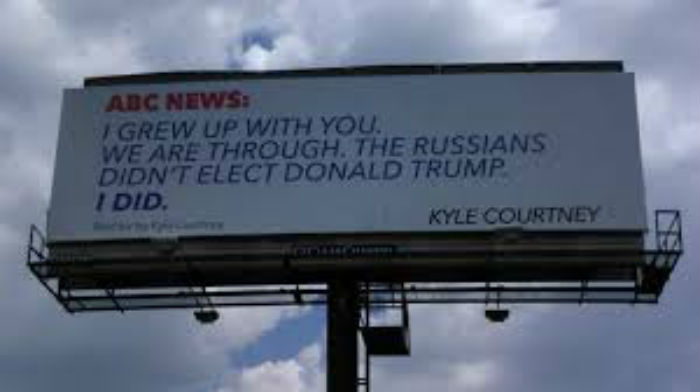 A Texas conservative wants the world to know he feels about the liberal media. So he decided to erect a billboard.

Mainstream media outlets continue to alienate everyday Americans. The talking heads yammer endlessly about Russia this, and Russia that while ignoring the problems facing real Americans.

Neighbors of Kyle Courtney, a San Antonio resident, are now aware of his dissatisfaction. The Trump-supporter paid for a billboard complaining about ABC News’ biased coverage.

“ABC News: I grew up with you. We are through. The Russians didn’t elect Donald Trump. I did,” his billboard reads.

Democrats are still stewing over Hillary Clinton’s defeat. So much so that they’re stuck in the denial phase of grief, constantly trying to assure themselves that President Trump’s stunning victory was somehow a fluke, an accident, an event attributable to forces other than Trump himself.

“ABC News was the only channel I watched as a child growing up in Texas but I think they have lost touch with America and forgotten the working man,” Courtney said. “They don’t represent our voice anymore. Hillary Clinton’s presidential campaign was funded by the Clinton Foundation in close coordination with the media, and now we’re seeing them try to fix what they couldn’t fix during the election. They are doing everything they can, night after night, to create narratives and sway people’s direction to impeach Donald Trump.”

ABC News and similar networks may appeal to entitled millennials, but most Americans don’t care for such obviously fake news. Americans voted for Trump. The “not my president” contingent needs to get used to reality.

The Democrats repeated losses at the voter booths might convince money-hungry networks to change their tune. The baseless accusations they’re hurling at Trump are tarnishing their own party rather harming the president’s popularity. People like Trump; they still mistrust the Clintons.