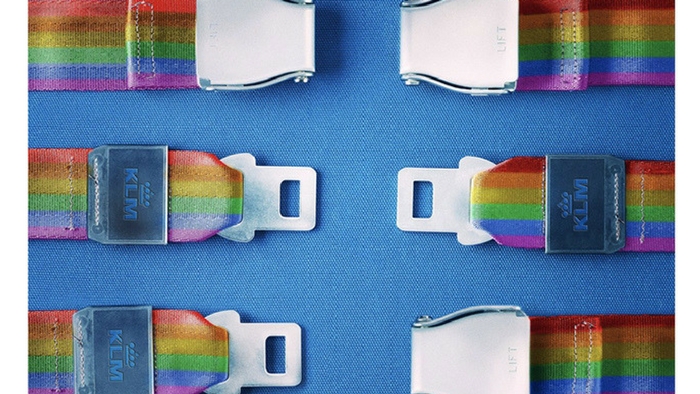 With the rise of the LGBTQ movement, most of the world has taken a “do you, boo boo” approach to dealing with “alternative lifestyles.” However, there are some businesses that are really trying to be seen as progressive and make themselves seem super inclusive.

One such company is Royal Dutch Airlines whose pride month publicity photo might not have hit quite the right note.

For the record, if I were a liberal I’d say that this was someone encouraging people to break the law. But since I’m a conservative I realize we’re just seeing stupid groomed, petted and put on display.

It doesn't matter who you click with. Happy #PrideAmsterdam ????️‍???? pic.twitter.com/ZTBHvCx1Pp

Oooooookkkkkkkk. That seems exactly as counter intuitive as ascribing to any of the LGBTQ factions. Side note; if I’m ever on an airplane and I see that some people have beautifully colored seat belts and I don’t, I’m crying discrimination, pronto.

This ad did have some supporters.

Please ignore the haters, both passive and overt. Brilliant ad in tone, stance, and execution. Well done.

However, by and large, people saw the irony right away.

Apparently you don't know how biology OR seat belts work.

Does this mean y'all will finally stop bothering me when my seatbelt isn't buckled in flight? Doesn't matter how I click.

Who knows Aaron, maybe if you claim some bizarre sexual orientation you can get out of all the rules.

Thanks for demonstrating again why LGBT is absurd:

Lol #getagrip it's the biggest marketing fail. 2 of the 3 Choices literally do not work.

You guys didn't think that one through, did you. pic.twitter.com/SpM356DkkA

Nope, don’t think they did.

I love it when #VirtueSignalling advertising #propaganda backfires. Lol. Thanks @klm

Liberals: always good for a laugh.

Two minor matters: I see only gender binary represented here, and does this ethic apply to pedophiles, or are they excluded from "clicking"?

Such a great question Joshua, thanks for asking.

Now just imagine for a moment that you’re flying with KLM and you’ve buckled the “heterosexual way” (formerly known just as buckling) and everyone who is homosexual has decided to just bump their belts together instead of buckling. That might be fine until the plane hits turbulence or starts to go down (which, after all, is what we’re all preparing for).

Just imagine how frustrating it would be to keep yourself safe with all those gay people flying around everywhere. That seems kind of like we’d be paying for their choices by having to deal with the repercussions of their not buckling.

"Fly Royal Dutch Airlines, where your only chance of surviving a crash is buckling up the heterosexual way." #TLP https://t.co/g6eJbe0SlT

And last but not least; how all of us feel reading ads like this.