Ever since Trump announced he would be in the presidential race, there has been speculation as to whom he would pick as a VP candidate.

Earlier this year, after he received a big endorsement from Sarah Palin, many though he’d pick her like John McCain did back in 2008. There’s also been many rumors flying around about former GOP presidential candidates such as Ben Carson and Marco Rubio, and yes even Ted Cruz. However, Sean Hannity wanted to find out what you the people thought.

Hannity conducted a poll and 61,000 people allegedly responded. There was an overwhelming favorite.

Last week we asked you who should Donald J. Trump choose as his running mate. Well, you’ve spoken. Over the course of six days, more than 61,000 of you voted in our poll.

Check out the full results of the poll: 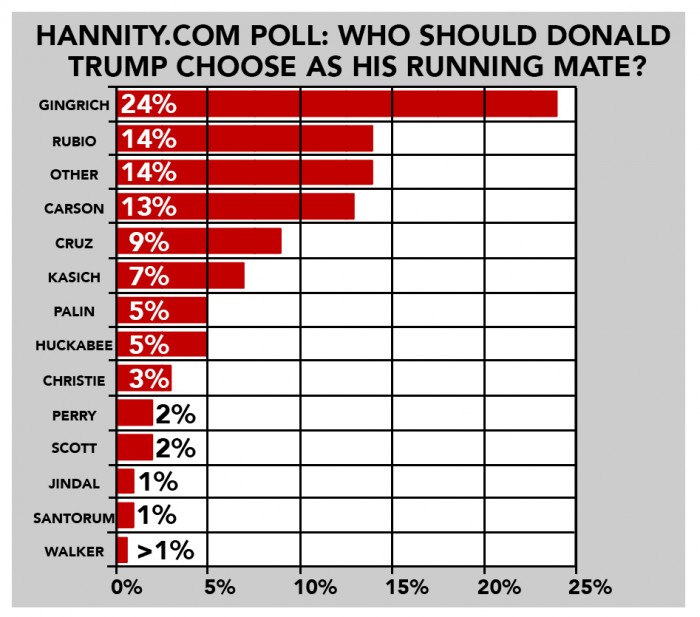 As you can plainly see, Hannity’s viewers are in favor of former House Speaker Newt Gingrich running on the Trump Ticket. And this doesn’t seem too far fetched either as we’ve reported Gingrich being a fan of Trump. He’s also spoken out about him on social media.

What the political elites and media don’t understand about @realDonaldTrump > https://t.co/4namzas3jV pic.twitter.com/0HSOGsR11F

Either way we think Gingrich would be a great VP. We also think Carson or Rubio would be excellent as Trump’s right hand man, though Rubio has already taken himself out of that conversation. Never say never, Marco, you could be in a position to make history.