When I saw this world cloud of commons terms associated with Hillary Clinton, I couldn’t help but laugh and cheer. This is awesome!

Ever since she through her hat in the ring for the presidency, Hillary Clinton has been under huge scrutiny. None more than the Benghazi and Email scandals that have rocked and permeated her campaign to it’s core. Yet she still has soldiered on. Well she may still be in the race, but when the Washington Post asked both liberals and conservatives alike what words they would associate with her, the results weren’t pretty. Check out the picture below. Larger words were ones that appeared most often. 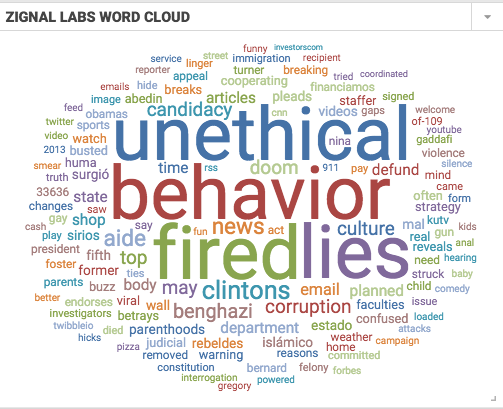 The 4 most common are: Unethical, behavior, fired, and lies. Others that aren’t too flattering are benghazi, corruption, email, doom, busted, and betrays. I’d say those all suit her pretty well actually.

No matter the case, Hillary Clinton is not fit to run the country, and the people have spoken. We don’t want her. Lock her up and throw away the key!