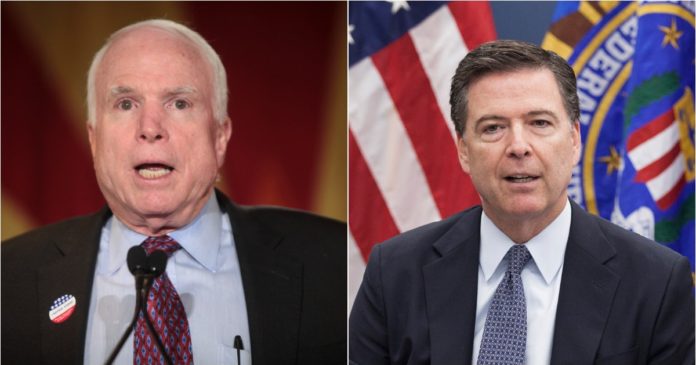 “I agreed to receive a copy of what is now referred to as ‘the dossier,’” McCain writes in his upcoming book, The Restless Wave. It’ll be released later this month.

“I reviewed its contents. The allegations were disturbing, but I had no idea which if any were true. I could not independently verify any of it, and so I did what any American who cares about our nation’s security should have done.”

According to McCain, he learned about the controversial dossier in 2016. He couldn’t verify the claims so he walked them straight into Comey’s office.

“I went to see him (Comey) at his earliest convenience, handed him the dossier, explained how it had come into my possession,” McCain writes.

“I said I didn’t know what to make of it, and I trusted the FBI would examine it carefully and investigate its claims. With that, I thanked the director and left. The entire meeting had probably not lasted longer than ten minutes. I did what duty demanded I do.”

McCain’s book is already causing ripples across Washington and it hasn’t even been released yet.

Esteemed colleagues are flocking to the Arizona lawmaker’s bedside to say goodbye. The 81-year-old was diagnosed with brain cancer last summer and many believe that his condition has worsened.

However, he’s not giving up. He’s still expressing his opinions, still living up to his duties as an American senator.

“You’re damn right, I’m a champion of compromise in the governance of a country of 325 million opinionated, quarrelsome, vociferous souls,” he writes in his book.

“There is no other way to govern an open society, or more precisely, to govern it effectively.”