Oh man. Ted Cruz just can’t seem to dig himself out of a hole can he?

In a bout of what I can only surmise is insanity. Ted Cruz just announced his running mate for the Presidential Election. And it’s no one anybody saw coming. It’s Carly Fiorina.

Yes. The same Carly Fiorina that was in the running for the GOP primary, only to fall by the wayside after never making it to a single “main event” debate and having less support than nearly all of the other competitors. Cruz and his camp are excited, but we fail to see why this would push him ahead of Trump. 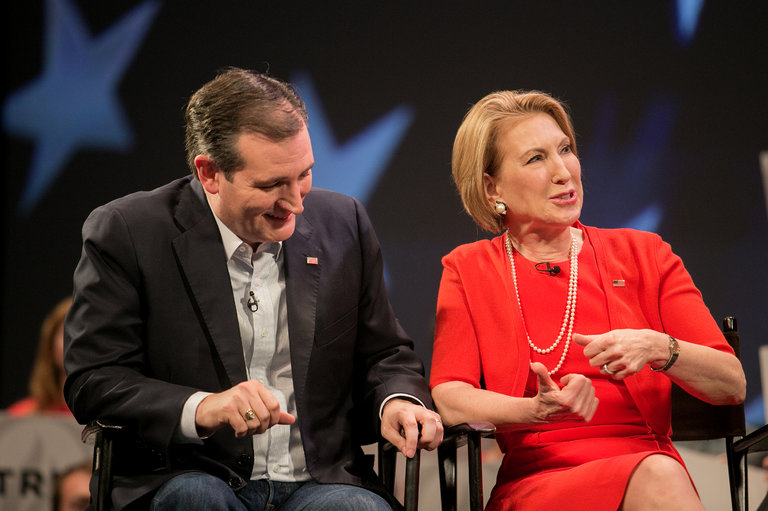 Senator Ted Cruz of Texas, desperate to alter the course of a presidential primary fight in which Donald J. Trump is closing in on victory, will announce Wednesday afternoon that Carly Fiorina will be his running mate if he wins the Republican nomination, two campaign advisers confirmed.

The move, a day after Mr. Trump scored unexpectedly wide victory margins in sweeping five East Coast states, amounts to the grandest diversionary tactic a presidential candidate can stage — or at least the grandest one available to a candidate trailing by about 400 delegates who failed to win more than 25 percent of the vote in any state on Tuesday.

Which is essentially correct since the Trump talk has died down with this news. But let’s not take that away from Trump as he CRUSHED Cruz in every state in the second Super Tuesday.

Mr. Cruz’s decision to rush out a vice-presidential pick before next week’s primary in Indiana, which is becoming make-or-break for his candidacy, was the political equivalent of a student pulling a fire alarm to avoid an exam: It was certain to draw attention and carried the possibility of meeting its immediate goal, but seemed unlikely to forestall the eventual reckoning.

Still, for Mr. Cruz, it could serve to shift the focus away from Mr. Trump’s success and from his own wheezing alliance with Gov. John Kasich of Ohio, who agreed to clear out of Indiana if Mr. Cruz withdrew from competition in Oregon and New Mexico. And since endorsing Mr. Cruz last month, Mrs. Fiorina, the former presidential candidate and Hewlett-Packard chief executive, has proved to be an eager surrogate, attacking both Mr. Trump and Hillary Clinton with zeal.

Don’t think that’s going to make a different now Teddy. Trump is doubling you up in delegates and now you have a loser on your team as your VP. Didn’t think that one through now did ya?