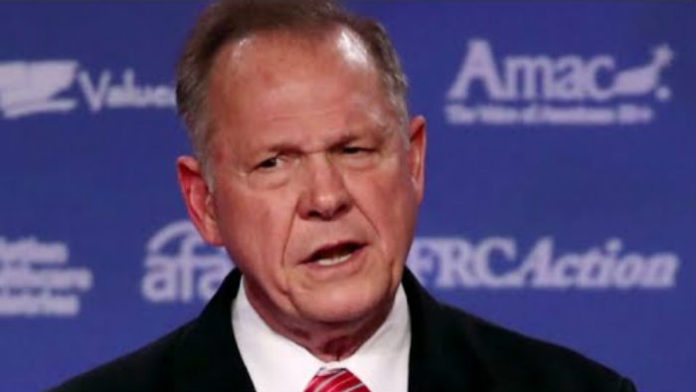 The Republican Party has found itself embroiled in a serious controversy, and it may result in the loss of an easy-to-win Senate seat. Attorney General Jeff Sessions vacated his seat in Congress when Trump came calling, and Alabama is now having a special election to fill it.

However, the Republican candidate, who was actually opposed by the Establishment and Trump in the primary, is in major trouble as an explosive scandal has emerged just in time to tank his campaign.

As reported at the New York Post, Roy Moore, who’s been accused of seeking out relationships with underage girls back in the 1970s, when he was in his early 30s, is now slipping in the polls.

Moore’s support remained steady initially, but the media’s been talking about the allegations non-stop and Republican politicians have been disavowing him left and right.

Democrat Doug Jones now leads Moore by 4 percentage points in the ​special election ​race for US Senate — 46 percent to 42 percent​​ with 9 percent undecided, according to a JMC Analytics and Polling survey. In October, Moore ​had a ​48-40 percent ​lead ​in the same survey.

The Washington Post published a story Thursday about four women who said Moore sought a sexual or romantic relationship with them when they were teenagers and he was in his 30s. One woman, Leigh Corfman, said she was 14 when a 32-year-old Moore took her to his home, undressed her and took off his clothes. Moore touched her over his bra and underpants and guided her ​hand ​to touch him over his underwear.

Moore vehemently denies any sexual misconduct with minors and has refused to drop out of the race, despite many Republicans calling on him to do so.

“Roy Moore has in the last month seen the race move against him,” the JMC Analytics polling summary concluded.

Digging deeper into the numbers, 38 percent of voters said they are less likely to support him due to the allegations​, 29 percent said it makes them more likely to support Moore, while 33 percent ​said ​it made no difference.

A Nov. 9 Opinion-Savvy poll showed a tight race with Moore at 46.4 percent and Jones at 46 percent. Moore was still ahead 48 to 46 percent in a Big League-Gravis poll of 478 likely voters conducted Nov. 10.

Other polls still have Moore leading or practically tied with his opponent, but there’s no mistaking that the scandal is slowly chipping away at his support.

President Trump won Alabama in a landslide 62-34 percent​ last year, and it was all but a guaranteed victory for Republicans heading into the election. But thanks to these allegations, we may witness an upset December 12. A loss would certainly be a poor way to kick off the upcoming midterms, which will be crucial to the success of Trump’s presidency. But a victory could be just as bad if as soon as he arrived in Congress they voted to expel him. It’s an all-around terrible situation for Republicans.