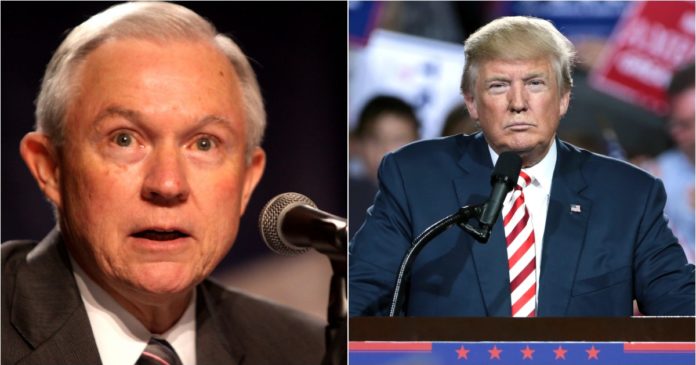 Attorney General Jeff Sessions has been in the doghouse ever since he allowed control of the Russia investigation to be wrested away from him. President Trump blasted him on Twitter on Tuesday, forcing Sessions to publicly defend himself.

“We have initiated the appropriate process that will ensure that complaints against this department will be fully and fairly acted upon if necessary,” he said in a statement.

“This department will continue to do its work in a fair and impartial manner according to the law and the Constitution.”

Trump is furious with his AG because of his perceived lack of action. In addition to recusing himself from the Russia investigation, Sessions hasn’t looked into the FBI’s handling of FISA warrant requests.

“Will take forever, has no prosecutorial power and already late with reports on Comey etc. Isn’t the I.G. an Obama guy? Why not use Justice Department lawyers? DISGRACEFUL!

The Justice Department was quick to issue a statement in response.

“We believe the Department of Justice must adhere to the high standards in the FISA court,” Sessions said Tuesday. “Yes, it will be investigated. And I think that’s just the appropriate thing the inspector general will take that as one of the matters he’ll deal with.”

AG Sessions’ hasn’t had an easy job. Trump demands near perfection from his associates and Sessions had a lot of messes to clean up when he took on the job. In addition to the mishaps regarding the FISA warrant investigation, Sessions also inherited the slow-moving case against Hillary Clinton.

Despite the criticisms, Sessions is still loyal to Trump.

“Jeff Sessions is loyal to the president and he’s one of the first to support him, and he’s often in very difficult positions and I think he’s trying to reconcile as best as he can,” Republican Rep. Peter King said.