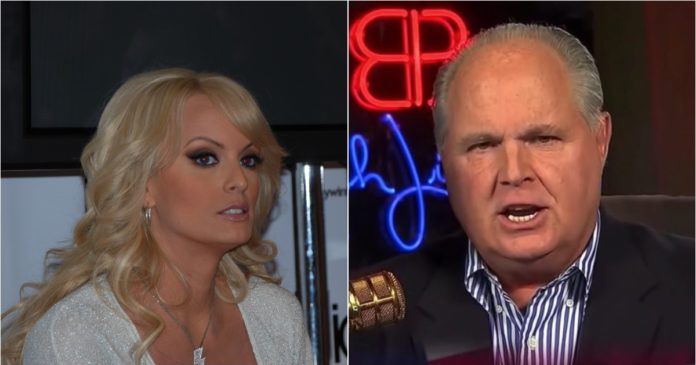 The midterm elections. Do the Democrats have an agenda? I’m not sure, because the only thing that the party is blabbing about is Daniels.

“What could be a better modern-day mascot for the Democrat Party than Stormy Daniels barely wearing anything with dollar bills stuffed into it while prancing around a bunch of drunk guys next to a pole in a place like the Bada Bing? If that’s not the perfect mascot image for the Democrat Party. Let ’em own it!”

Democrats can’t figure out what they want. The party is completely out of control. No one likes Nancy Pelosi yet she’s refusing to step aside. Their best shot at a 2020 victory are women who claim they’ll never run (Oprah Winfrey, Michelle Obama).

The focus on Daniels and her tired old story is a big mistake. Limbaugh’s right, when Daniels isn’t giving drugged-up interviews she’s prancing around in a thong begging for dollars. It’s a great gig for her. The liberal media isn’t helping the Democrats rebuild their party but it is creating a great career for Daniels. She’s absolutely raking in cash.

Expect to keep hearing about Daniels and her antics. Dems don’t know when to let things go.