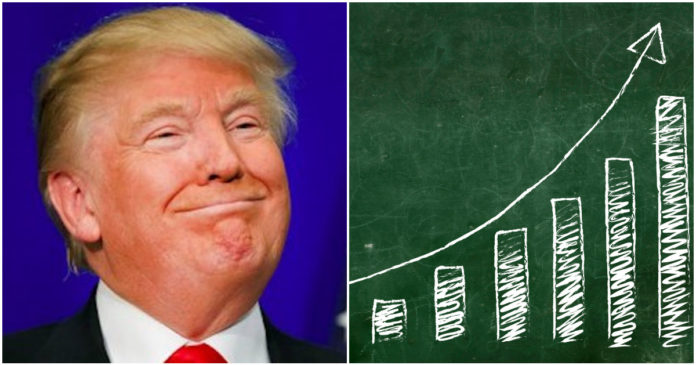 After months of duking it out in Congress, the controversial tax proposals were finally signed into law by Trump. Democrats and the media did their best to fear monger about the cuts, saying the usual stuff like the rich won’t be paying their fair share, but it just wasn’t enough, since Congress is in the hands of Republicans.

With the new tax law just making it to Trump’s desk, we have a new tracking poll that gives some insight into what voters think about the plan and his overall performance.

As reported at Rasmussen, Friday’s tracking poll shows that 44% of likely US voters approve of President Trump’s job performance, while 54% disapprove. Which isn’t bad considering the constant propaganda war being waged against him.

Breaking down the numbers further, 29% strongly approve of Trump’s performance and 44% strongly disapproving, giving him a Presidential Approval Index rating of -15.

While his general approval numbers may not look too great, feelings about the economy and taxes are quite better.

In light of the passage of the biggest tax reforms in decades, which will see most Americans’ taxes get cut, most Republicans 66% and 50% of voters not affiliated with either major party think tax cuts help the economy. With only 22% of Democrats agreeing.

Coinciding with tax cut approval is the optimistic feeling voters now have about the country’s future.

On Monday, Trump gave an America First theme speech centered around national security, and he announced plans for a layered missile defense system to help protect the US from missile attacks. Voters strongly support the plan to beef up our missile defense capabilities.

Another interesting revelation of the poll shows that only 30% of citizens think that US foreign policy in recent years has put America first. Rounding out the findings is that 94% agree with the Trump that a strong economy is important for our national security, with 70% saying it’s very important.

Overall, the latest numbers are looking good. While the general approval rating could still use some work, when it comes to actual ideas and policies, Trump has the nation’s support.