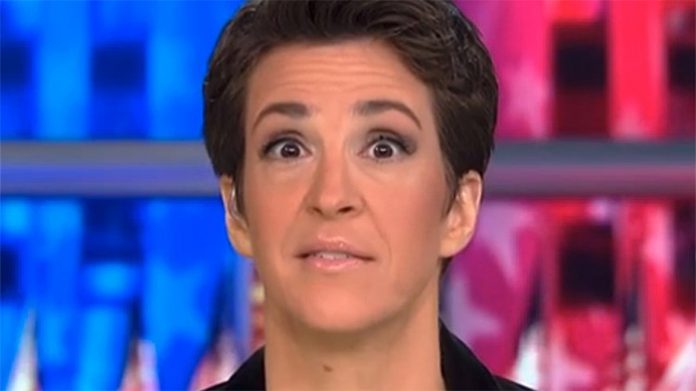 Rachel Maddow was kind enough to tweet in advance and even set a countdown clock leading up to the live TV demolition of her reputation.

But apparently, we need to be watching more closely because she’s not done making a mockery of her air time.

Rachel Maddow: Congressman Bill Pascrell was finishing up an interview with Rachel Maddow when he accidentally said ‘Thank you, sir’ as he was signing off.

Rachel Maddow: “Congressman, thanks for being with us tonight sir.” Congressman: “Thank you, sir…uh I mean ma’am”

“It’s alright, I answer to both (awkward laugh) it’s actually quite convenient in unexpected places…you’d be surprised. We’ll be right back..”

This is just not Rachel Maddow’s week. She fell flat on her face when she revealed Trump’s 1040 tax form the other night showing he paid millions in taxes at a higher rate than Obama and Sanders.

There’s a saying that advises: “when you find yourself in a hole, the first thing you do is stop digging. Somebody needs to send that over to MSNBC, because while you can say that what Maddow lacks in decorum she makes up for in spunk, the woman just won’t quit(I guess we still call her that?). I’m all for rolling with the punches, but there’s really no need to jump in front of them.