This just proves we need a stronger leader and Obama is the weakest president we’ve ever had.

Putin is a much stronger leader. That is a fact. Last week, Russian planes did a dangerously close flyby to a U.S. ship which was in very VERY poor taste, even for the Russians. Obama’s response when that happened essentially equated to a toddler being scolded by a parent with the tone of, “Hey. Don’t do that! You know better!”

So now, when the U.S. allegedly sailed a ship close to Russian borders and Putin has given a warning, what’s Obama done? Cowering under his desk. 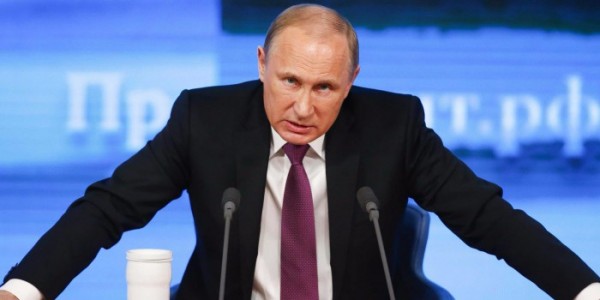 Russia accused the United States on Wednesday of intimidation by sailing a U.S. naval destroyer close to Russia’s border in the Baltics and warned that the Russian military would respond with “all necessary measures” to any future incidents.

Speaking after a meeting between NATO envoys and Russia, their first in almost two years, Moscow’s ambassador to NATO said the April 11 maritime incident showed there could be no improvement in ties until the U.S.-led alliance withdrew from Russia’s borders.

“This is about attempts to exercise military pressure on Russia,” the envoy, Alexander Grushko, said. “We will take all necessary measures, precautions, to compensate for these attempts to use military force,” he told reporters.

Not a single word from Obama. What a weakling.

U.S. Ambassador to NATO Douglas Lute pressed Russia about the incident, warning it had been dangerous. The United States has said the guided missile destroyer USS Cook was on routine business near Poland when it was harassed by Russian jets.

“We were in international waters,” a NATO diplomat reported Lute as telling Grushko during the NATO-Russia council meeting.

Where’s Trump when you need him? He would at least negotiate an awesome deal for America to make sure that we don’t make enemies and get into pointless wars because of corporate interests again. Hell, we might even have a chance at joining forces and eliminating ISIS once and for all. How does THAT sound?