It’s no secret we love Donald Trump here at Yes I’m Right. After I saw this story though, it only strengthened my support for him!

Most liberals, and many Republicans now, are saying that Trump is disruptive and bombastic and heinous. Some say he’s ruining the Republican party. I saw that’s a load and here’s a great example of why that’s false.

At a recently Trump rally in Waterloo, Iowa, many protesters showed up with the goal of challenging Trump on climate change and to generally be disruptive. This has happened in the past and Trump has dealt with it in style and with class, but a bit of edge. Here he shows his softer, more reserved side. 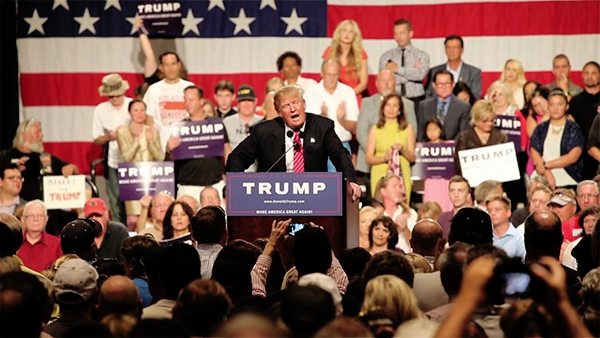 Trump was mid-speech at a local ballroom discussing the thousands of Syrians fleeing tumult in the country when several audience members holding up large red signs started to yell, ‘Mobilize now.’

Some of Trump’s supporters did not take to the hecklers kindly, and at least one of them appeared to grab a sign away from the protesters.

The Republican presidential front-runner urged the crowd to remain calm, saying, ‘We want to be nonviolent towards those people.’ After the protesters were escorted out by police, Trump thanked the audience for not hurting them.