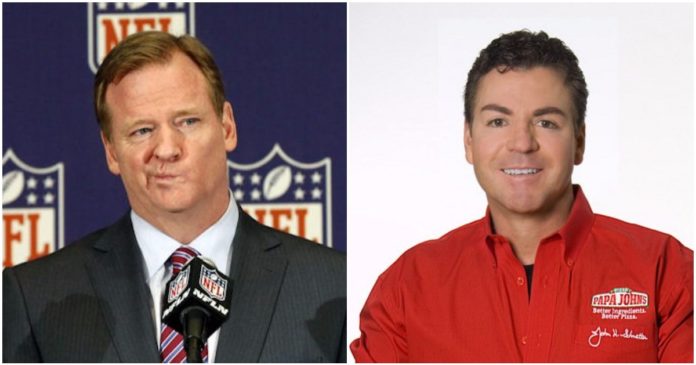 The National Football League is a powerhouse when it comes to attracting sponsors and making money. However, the last year has seen the once seemingly invincible league falter, as player protests have gripped the league and caused fans to change the channel.

If there’s one thing owners, shareholders, and sponsors all hate it’s seeing their revenue dip. In light of the protests, the trajectories of their profits are starting to go down, which is beginning to cause some friction between the league and its business partners. One of the most prominent of all the NFL sponsors is pizza chain Papa Johns, and during a conference call Wednesday, the infamous “Papa John” himself had some harsh words for the NFL’s handling of the situation, which he blames for his company’s mediocre sales.

As reported at the New York Post, John Schnatter, the CEO and guy you see in all of Papa John’s commercials, said, “The NFL has hurt us. We are disappointed the NFL and its leadership did not resolve this.”

Schnatter said that the whole player protest movement had been “nipped in the bud” by the end of last season, with only a few players participating. But after Trump’s comments at the start of the new season, he says the league didn’t do enough to mitigate the impending fallout.

Schnatter blames the highly divisive NFL Commissioner Roger Goodell for his sale slump, saying the buck stops with him.

“Leadership starts at the top, and this is an example of poor leadership,” Schnatter added. “NFL leadership has hurt Papa John’s shareholders.”

Papa John’s has been a primary sponsor with the NFL since 2010, even enlisting the league’s most marketable and known quantity, Peyton Manning, to star in their ads. However, since the protests took off, the company has actually pulled some of its ads, with the NFL promising ad space in the future to keep them happy.

On Wednesday, the company’s stock fell to an 8-month low, which is likely a big reason why Schnatter felt the need to speak out. It won’t be surprising if more and more sponsors start publicly voicing their displeasure with the league, as Papa Johns isn’t the only company being negatively affected by the protests and subsequent ratings drop.