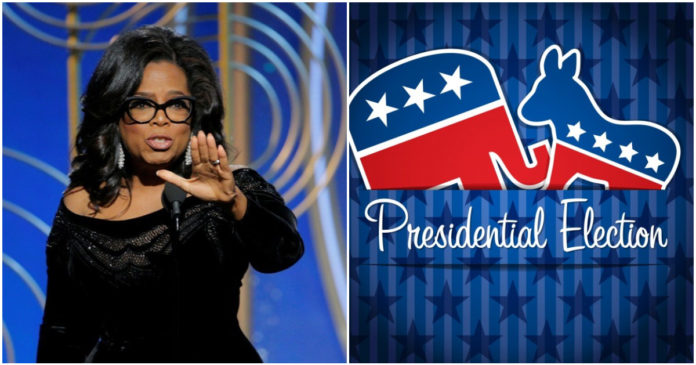 Trump’s miracle victory in 2016 has changed the landscape for future presidential candidates. The thought that celebrities with zero experience couldn’t possibly win has changed, as has the willingness to back such candidates.

To combat Trump in 2020, leftists have thrown out several celebrity candidates, with the most popular being Oprah Winfrey. There’s been a lot of speculation in recent months that billionaire would throw her hat into the ring, especially after an impassioned Golden Globes speech that sounded like a campaign announcement. However, in a recent interview, Oprah addressed the question of her potential candidacy, giving an answer that few liberals probably wanted to hear.

As reported at the Daily Mail, during a 60 Minutes Overtime interview, Oprah poured cold water on the talk of her presidential ambitions.

‘I am actually humbled by the fact that people think I could be the leader of the free world, but it’s just not in my spirit,” Winfrey said. “It’s not in my DNA.”

The full interview will air on Sunday on CBS, as it was part of a sit down with a group of Michigan voters, half of whom voted for President Trump. Winfrey first gathered this group of 14 together in September and her new interview with the panel will show how their political views have evolved.

When talking about her infamous Golden Globes speech, Oprah said she was “stunned” that she was suddenly considered presidential material and being called upon to run for the White House.

“I was just trying to give a good speech,” the talk show host said. “I was looking for a way to express what was going on in this moment in terms of gender and class and race.”

“I cared about landing that speech in the room,” Winfrey added.

She said that after the awards ceremony, her phone was blowing up with political and financial offers of help should she decide to run.

“I had a lot of wealthy men calling, telling me that they would run my campaign and raise $1 billion for me,” Winfrey told 60 Minutes. “I think that when you have that many people whose opinions you value coming at you, it’s worthy of thinking about.”

But Winfrey said that as of right now, she hasn’t felt the necessary compulsion to run.

“And wouldn’t I know? Because if God actually wanted me to run, wouldn’t God kinda tell me?” she mused. “And I haven’t heard that.”

So at the end of the day, it appears that Oprah hasn’t completely given up on the idea of running. She may say it’s not in her DNA, but she’s clearly leaving the door open and there’s still plenty of time for her to change her mind. She could very well be a formidable candidate should she run, so here’s to hoping that she never feels the necessary pull to throw her hat into the ring.