Wow. When you look as the cold hard facts, Ted Cruz seems to be even worse than we thought.

Cruz has gone on record saying that he’s very trustworthy. In fact, his campaign slogan is “TrusTed,” and obvious play on the word “trusted”‘ with his name in red lettering. Many people do think he’s trustworthy and more so that the other candidates. But would it change your mind that Politifact has a running list of all Ted Cruz’s lies? Here’s a list.

Then there’s this BRUTAL meme that shows exactly how many truths Cruz spoke of at one of the GOP debates. This is truly eye opening. 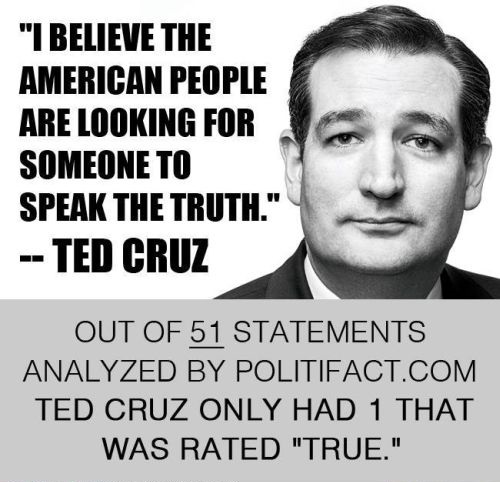 Is this a man we want running the country? He seems to lie just as much as Hillary! Don’t vote for Ted Cruz in the primaries. He’s not the answer we need.