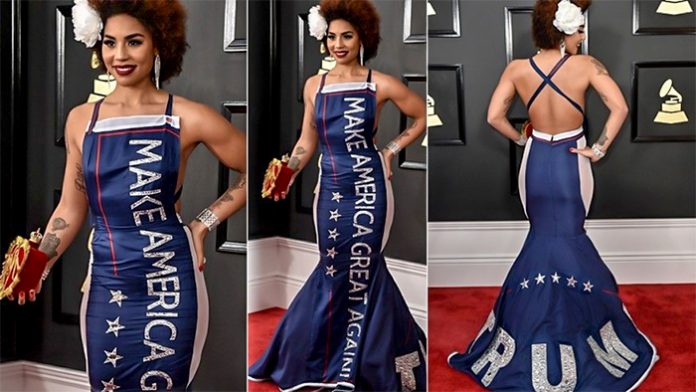 There’s no doubt that singer Joy Villa made a huge splash on the Grammy red carpet with her “Make America Great” again gown.

What you might not know is that her designer is gay Filipino immigrant Andre Soriano.

Soriano calls himself a “huge Trump supporter” and he is a proud naturalized American citizen.  He believes that his life is an example of what kind of American Dream can be accomplished through hard work and legal means.  He was discovered on Rihanna’s reality show, Styled to Rock, and now has a label in San Diego that launched in 2013 and sells ready-to-wear red carpet outfits online.

Soriano said he hoped that the dress brought a message of positivity with it.

Soriano has designed outfits for other stars as well including Macy Gray, Courtney Love and Bia Ling for their appearances on various red carpets.  He says though that he has a special connection with Villa.

Via Hollywood Reporter: “I always channel Joy’s music as a designer — we’re both artists, and I love her so dearly,” says Soriano. “She is one of the people on this planet that really promotes love. We need to move this country forward, and we believe it’s time to promote love. We only live once, and we need to promote love. We have one president now who is going to do the best thing for planet America.”

Sometimes you just gotta be free to express yourself. ????✨???? thank you to all of my supporter… https://t.co/08AGXxG5zy pic.twitter.com/S286YuONhE

Soriano, who obviously advocates the legal path to citizenship, said that his and Villa’s goal was to make a statement about what was right for the country.  I think it’s safe to say that they accomplished their goal.