Donald Trump, above all else, cares about our Constitutional rights and the safety of the country. That’s why he was so livid when Obama proposed new legislation that would keep guns out of the hands of law-abiding citizens because liberals believe that if less people are armed legally, then illegal crime won’t happen. Yeah, that makes perfect sense *sarcasm*

Trump took Obama to task for his incompetence in dealing with this issue.

According to CBS News, 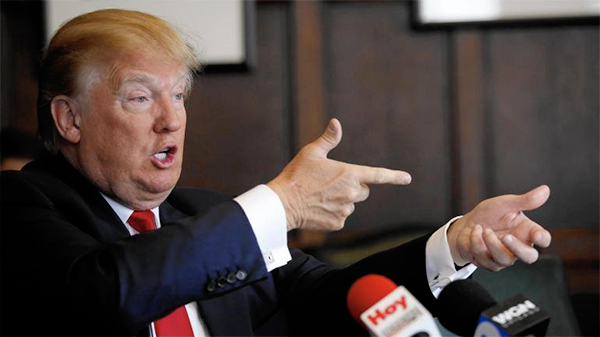 Not long after President Obama announced that he was considering taking executive action to tighten gun control laws, Donald Trump decried the idea, saying he didn’t like the possibility of altering the Second Amendment.

“I don’t like it,” Trump told “Face the Nation” moderator John Dickerson in an interview to air Sunday on CBS. “I don’t like anything having to do with changing our Second Amendment. We have plenty of rules and regulations.”

Obama, running around like a beheaded chicken, doesn’t know where to start with this issue.

One course of action the White House is considering is the expansion of background checksfor firearms procured at gun shows — currently not a requirement because such sales often involve individuals that are unlicensed firearm sellers.

But Trump pushed back against that option, saying that there are numerous other routes the administration can take to prevent mass shootings.

“There’s plenty of things that they can do right now that are already there,” the GOP presidential hopeful said. “They don’t do them.”

The billionaire pointed to America’s “tremendous mental health problem” as an example.

“All they want to do is blame the guns, and it’s not the gun that pulls the trigger, so I don’t like it,” Trump added. “I don’t like what he is doing.”