Leave it to Obama to over simplify everything and think that minimally invasive strategies will get the job done. Not so fast coward in chief!

Republican Senators John McCain and Lindsay Graham have gone off on Obama’s cowardess when it comes to ISIS and the terrorist organization when it comes to beating them. Air strikes are all well and good and France, Russia, and now Germany are all helping to rid the world of ISIS, but boots on the ground is the only way to truly wipe them out completely. At least Sen. McCain and Sen. Graham think so. 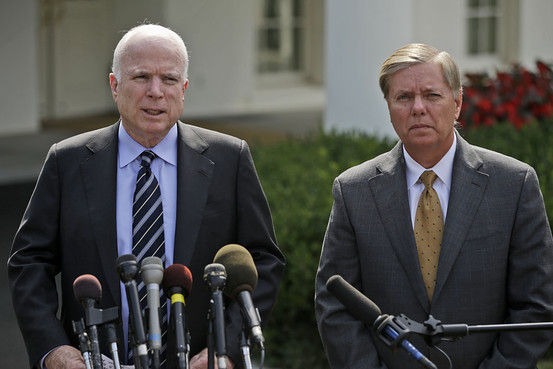 Two senior American senators called on Sunday for Washington to nearly triple military force levels in Iraq to 10,000 and send an equal number of troops to Syria as part of a multinational ground force to counter the Islamic State of Iraq and the Levant (Isil) in both countries.

John McCain and Lindsey Graham, who are both Republicans, criticised President Barack Obama’s incremental Isil strategy, which relies on airstrikes and modest support to local ground forces, and said the need for greater American involvement was underlined by this month’s Paris attacks.

Couldn’t agree more! With ISIS on our doorstep and Obama letting refugees into our country at a record rate starting in a month, we need to wipe out ISIS and all terrorism in the region as soon as humanly possible. Boots on the ground will get the job done, our boys are the best there is at that.

‘The only way you can destroy the caliphate is with a ground component,’ said Mr Graham who is seeking his party’s presidential nomination. ‘The aerial campaign is not turning the tide of battle.’

Mr McCain, chairman of the Senate Armed Services Committee, recently proposed intervention in Syria by a European and Arab ground force backed by 10,000 military advisers and trainers from the US.

I know I agree with this, but what about you? Do you think we need America troops to get on the ground and go fight ISIS head on? Let’s hear about it in the comments!