This is unreal and just sheds more light on Obama treating Muslims better than real Americans.

Anytime there is a peaceful protest or march of any kind from the Tea Party, Obama chastises it and calls it excessive. However, when it comes to Muslims, he seems to let them do whatever they please, and here’s proof.

Two years ago, Obama met with members of the Muslim Brotherhood to talk about Muslims in America and how they are finding their way in a world that hates them. Obama listened and declared that a National Muslim Advocacy Day should be held every year.

Yesterday was the second year in a row where Muslims descended on Washington to voice their concerns about “Islamaphobia.” Honestly, this is disturbing on the highest level. 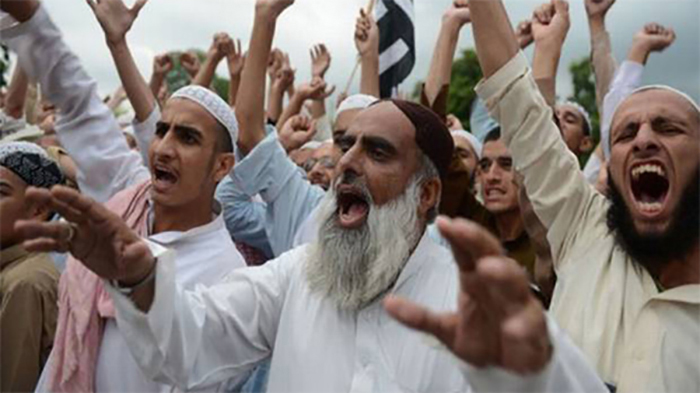 Monday was the second annual National Muslim Advocacy Day in which Muslims descended on Captol Hill to address concerns such as “Islamophobia” with their senators and congressmen.

But some critics are saying the day was misnamed. It should have been “Muslim Brotherhood Day.”

That’s because the organization behind Muslim Advocacy Day is a front for the Brotherhood, an extremist Islamist group known for establishing scores of fronts – including the Council on American-Islamic Relations, or CAIR – that fool the establishment media and many politicians.

Frank Gaffney, president of the Center for Security Policy and a former assistant secretary of defense under Ronald Reagan, penned an op-ed in the Hill Monday that shined a light on the shadowy political group that sponsors the day of lobbying and activism for U.S. Muslims. It’s the United States Council of Muslim Organizations, or USCMO.

Gaffney said most congressmen were likely oblivious as to who is behind the USCMO and National Muslim Advocacy Day.

“The USCMO is the latest in a long series of front organizations associated with, and working to advance, the agenda of the Muslim Brotherhood in the United States,” Gaffney writes.

What Muslim groups are doing is putting up front organizations to get what they want: the death of America and the rise of Sharia.

As Gaffney points out, the “Explanatory Memorandum” was an internal document meant for the eyes of the Brotherhood’s leadership in Egypt. It clearly states the mission of the Muslim Brotherhood in North America as “destroying Western civilization from within … by [the infidels’] hands and the hands of the believers so that Allah’s religion is made victorious over all other religions.”

There are two other important facts legislators should know about Akram’s memo, Gaffney states.

“First, the document helpfully attaches a list of 29 groups under the heading ‘Our organizations and organizations of our friends: Imagine if they all march according to one plan!’ A number of the identified Muslim Brotherhood fronts — and many others that have come into being since 1991 — are members of the U.S. Council of Muslim Organizations.

“Representatives and associates of such fronts will be among the Islamists in congressional offices on Monday,” Gaffney writes.

We MUST stop this from happening! Trump we need you!