Donald Trump is leading all over the country – that’s nothing new, but the fact that he can blow one of his opponents out of the water in his own state is telling of his awesome appeal and the state of politics in the country today.

Donald Trump, three-time primary winner so far, is leading a poll in which Florida Republicans were asked who they would vote for. Florida is Marco Rubio’s home state.

This is HUGE. According to Breitbart, 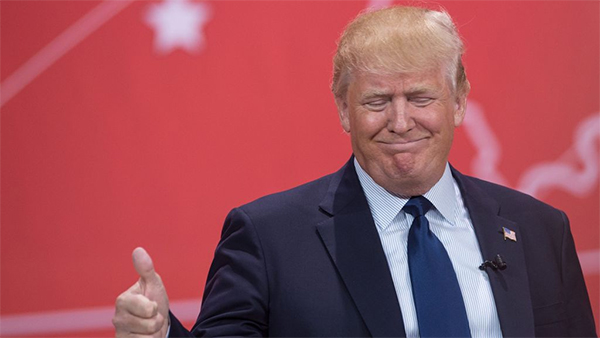 The latest Quinnipiac poll of Florida Republicans shows that Donald Trump is now leading that state with 44 percent of the vote, while home state Senator

Sen. Marco Rubio (R-FL) is in second with only 28 percent.

Trump is now 16 points ahead of Rubio after former Florida governor Jeb Bush dropped out of the race, an astonishing result in an important winner-take-all state that votes on March 15. Rubio yesterday pointed to Florida as a state he expected to win.

Trump’s not only leading with middle of the road Republicans either, he’s leading with evangelicals, a group that Ted Cruz spent a lot of money and effort trying to court. I guess they like a Trump Train over a Cruz ship!

The poll shows that Trump leads among Tea Party voters in Florida by 52 percent — a huge margin of 24 points over Ted Cruz who only earned 28 percent.

Among Evangelicals, Trump leads with 42 percent of the vote, followed by Rubio at 28 percent. Cruz only garners 19 percent of evangelicals in Florida.

When asked which candidate that voters would “definitely not support,” the majority (26 percent) chose Ted Cruz followed by Trump (21 percent) and Rubio at 17 percent.

The poll defies the media narrative that Trump has a “ceiling” of support in Florida, as it shows voters breaking his way after three dominant victories in early states.

That’s right – no matter what people say, the supporters have spoken. The establishment on both sides can’t take him down, now let’s get him into the White House!