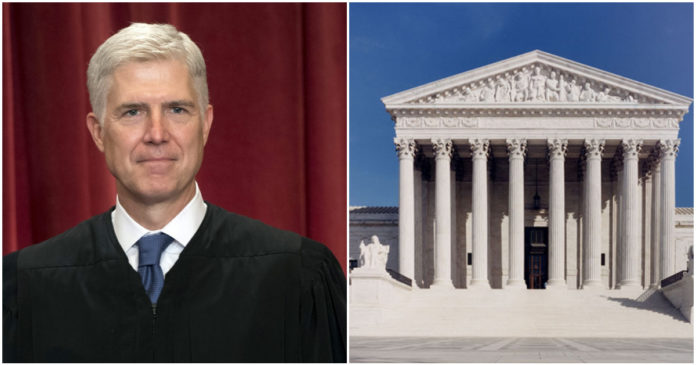 After not making many headlines since Trump assumed office, the Supreme Court is back in the news with a vengeance. It was just announced that the court wouldn’t make a move on the lower, left-wing court rulings against Trump’s DACA executive order, which is bad news, but now there’s hope for a long-awaited conservative victory on the horizon.

As reported at the New York Post, the Supreme Court debated a significant case on Monday that could spell the end for public sector unions, but the justice who may tip the balance when the final verdict is given remained mum throughout.

The newest member of the court, Neil Gorsuch, didn’t ask a single question throughout the debate. Instead, he listened to the heated comments made by his colleagues. Gorsuch and the court heard the arguments challenging an Illinois law that allows unions representing government employees to collect expensive fees from workers even if they choose not to join.

Back in 2016 the issue made in front of the court, but due to the death of Anton Scalia, the verdict was deadlocked at 4-4.

However, with Gorsuch having been appointed to the bench in April 2017, there’s now an opportunity to get some resolution on the contentious issue of mandatory union fees.

Unions almost exclusively support leftists, and those forced to join pay expensive union dues that often end up in the campaign funds of Democrats. This decision could affect more than 5 million government workers throughout 24 states, and it would be a massive blow to the power and influence public sector unions have wielded for many years.

The Left is fearful of losing a powerful ally and treasure trove of money should the decision go in favor of those against mandatory fees. Essentially the argument boils down to whether or not a person has a constitutional right to not give money to a union that doesn’t represent their views.

Many states have already outlawed the practice via “right to work” legislation, but many blue states have refused to give workers the option. But it looks like there’s now a chance for folks regain their freedom and not be forced to practically hand out money to the Democratic Party.