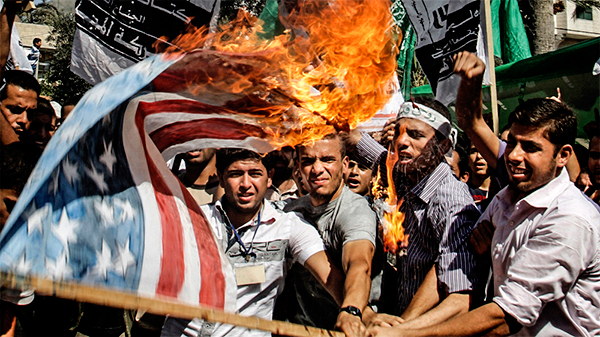 This is an annual thing that happens in Iran. That’s not an over exaggeration. It’s an actual fact.

Every year, on the anniversary of the U.S. embassy takeover in Iran, Iranians celebrate this disgusting act of inhumanity but burning the American flag. And if you needed a reminder, this is a country that Obama just made a deal with to relieve sanctions in return for a “word of honor” that they won’t develop a nuclear bomb.

This is what they think of us. And Obama still wants muslim refugees coming in to our borders? Sick. It makes my physically sick.

In the short term, things may even get worse, analysts say, as Iran’s Supreme Leader Ayatollah Ali Khamenei continues to warn about American influence, a crucial parliamentary election approaches and the country’s intelligence and military services try to hold onto their economic and political power.

So remember this election season when people say the GOP, Trump in particular, has no foreign policy experience and this will make the U.S. seem weaker. Obama is doing a pretty good job of making us look weak and having no foreign policy to begin with so whatever the GOP has cooking up has got to be better than this right? RIGHT?!