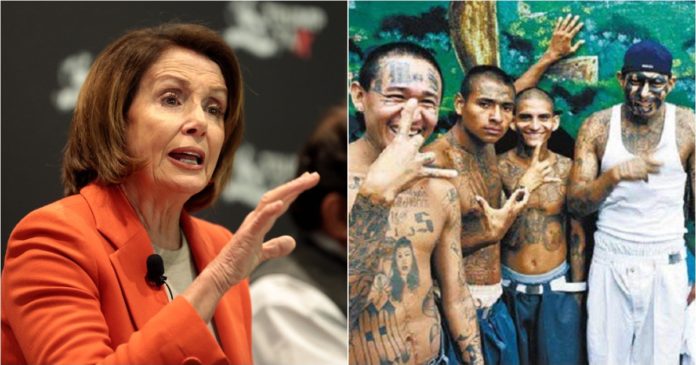 Nancy Pelosi is so desperate to trash President Trump that she actually defended MS-13. It’s pathetic. You would think that everyone would agree that a murderous, vicious gang that brutalizes innocent people is evil but Pelosi made a big point about their “divinity”.

President Trump previously said of MS-13: “These aren’t people, these are animals.”

Pelosi twisted his comments and applied them to immigrants in general. “So when the president of the United States says [that] about undocumented immigrants, you have to wonder, does he not believe in the spark of divinity, the dignity and worth of every person?… Calling people animals is not a good thing.”

True, calling people animals isn’t a good idea, but MS-13 thugs are a special group of people. They’re men and women who have committed to being monsters. MS-13 is responsible for a lot of terrible murders. Pelosi, however, wants to focus on the “good” parts of the gang, mentioning that “there is a spark of divinity among every person on earth, and we all have to recognize that as we respect the dignity and worth of every person.”

Democrats are turning lying about Trump into an art form. It’s incredible the way that they’re able to twist his words. Trump is extremely respectful, he spoke harshly about MS-13 because they’re violent people.

Pelosi pretended that she thought Trump’s comments were anti-Christian. “Some of us who are attracted to the political arena, to government and public service believe that we are all God’s children…”

Pelosi has much bigger problems to worry about than her stupid beef with President Trump. Her own party is sick of her, Democrats are desperately trying to force her into retirement. She’s clinging to power anyway because she doesn’t actually care about anything except her own career.