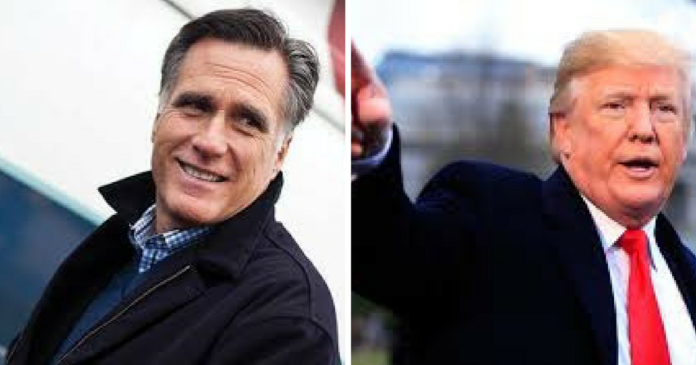 The last few months have seen a rash of Republicans forgoing reelection despite the party having just captured the White House. While there are a lot of reasons, many of them stem from their distaste for Trump, and the fear that Democrats are set to dominate in the 2018 midterms.

So rather than stick around to deal with a president they despise and risk getting embarrassed as an incumbent, they’re calling it a day. One of these retirements just so happens to be a Senate seat in Utah, where there’s been speculation for years that twice failed presidential candidate Mitt Romney might run. Unfortunately for conservatives, it looks like the speculation is over, as it appears Romney is poised to throw his hat in the ring for Senate.

As reported at the Washington Examiner, Romney is set to launch his Senate campaign Thursday morning via social media, and a day later, he’ll make his first public appearance near Salt Lake City with a keynote address to a gathering of grassroots Republicans.

The former Massachusetts governor hinted at his run on February 1, when he tweeted out that he’d be making an announcement on the 15th. On Wednesday, Romney previewed his campaign again in a short Facebook post. Sources have since confirmed that he’ll make a digital announcement to launch his candidacy, rather than holding at a staged rally with supporters.

For weeks now, Romney’s been scheduled to speak in Provo on the 16th as a headliner for the Utah County Republican Party Lincoln Day dinner. Utah County is a heavily Republican area and the most influential when it comes to statewide campaigns. Romney’s run isn’t that surprising considering his beloved status in Utah and political ambitions. As it stands, it’s unlikely he’ll face any kind of stiff competition, which means the race could be a cakewalk for him.

Romney has been fiercely anti-Trump, siding with the “conservative” faction of “Never-Trumpers” that mercilessly attacked the president throughout the campaign, and who still continue to trash him. Romney’s no conservative, as his record proves, and his candidacy and likely victory is a negative for the GOP, as it will only create further division in the party at the worst possible time. There are already far too many RINOs and cowards refusing to work with Trump, but add Romney into the mix and we’ll have a new “leader” for the anti-Trumpers to follow.