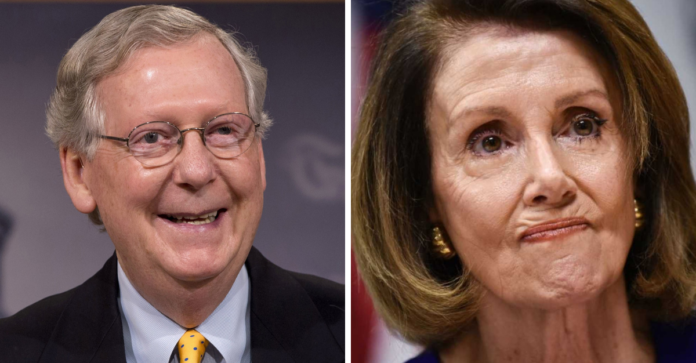 McConnell and the Republican Party that he represents will keep control of the Senate, while Democrats are projected to take control of the House of Representatives.

When asked about the possibility of Democrats insisting on the public release of President Donald Trump’s tax records, McConnell warned Democrats that it has historically gone badly for a party that made a president’s job more difficult.

“Presidential harassment,” he warned, can be a losing proposition for the party in control on Capitol Hill.

“The business of presidential harassment – which we were deeply engaged in the late 90s – improved the president’s approval rating and tanked ours,” McConnell said a press conference at the Capitol on Wednesday.

“The whole issue of presidential harassment is interesting,” he noted. ‘I remember when we tried it in the late ’90s. We impeached President Clinton. His numbers went up and ours went down, and we underperformed in the next election.”

“So the Democrats in the House will have to decide just how much presidential harassment they think is a good strategy,” McConnell added. “I’m not so sure it’ll work for them.”

Democrats are reportedly already vowing to begin investigations into Trump, and his financials, while Trump responded saying that “two can play that game.”

“If the Democrats think they are going to waste Taxpayer Money investigating us at the House level, then we will likewise be forced to consider investigating them for all of the leaks of Classified Information, and much else, at the Senate level. Two can play that game!”

If the Democrats think they are going to waste Taxpayer Money investigating us at the House level, then we will likewise be forced to consider investigating them for all of the leaks of Classified Information, and much else, at the Senate level. Two can play that game!

When asked how he will work with Pelosi to fund the border wall, McConnell indicated that he is dedicated to finding the funding for the wall.

“We certainly going to try to help the president achieve what he’d liked he to with the wall and border security,” McConnell said when asked if he could get the $5 billion needed to build the wall.

Before the election, Pelosi spoke at the Harvard University’s Institute of Politics and said that she believes the president’s wall is “immoral,” the Daily Mail reported.

“It’s immoral, expensive, ineffective and not something people do between countries,” she said. “In any event, it happens to be like a manhood issue for the president, and I’m not interested in that.”

Pelosi stated that there was “nothing” she would trade on her agenda in order to let the president build his billion-dollar wall.