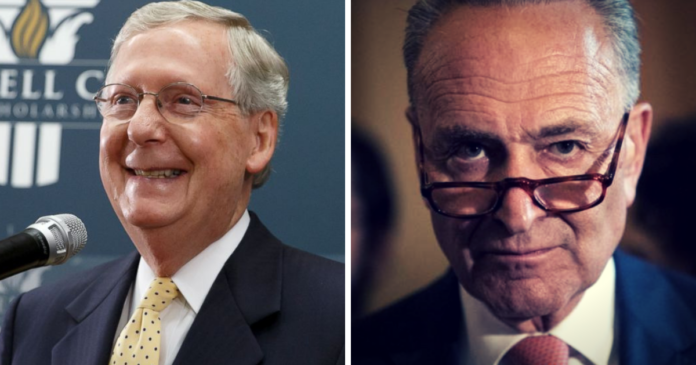 Senate Majority Leader Mitch McConnell (R-Ky.) spoke on Wednesday about the midterm elections. He said that Republicans “had a great day” after growing their majority in the Senate.

He also noted that the GOP lost the House to the Democrats, but he reiterated a suggestion to the new Democratic House majority that potentially “harassing” the president wouldn’t’ be a smart idea.

“The business of presidential harassment might not work out too well for you politically,” he said, referring to possible investigations of the administration.

He also said that attacks on health care or Social Security by the GOP were a “Democratic fantasy” in response to remarks made by Rep. Nancy Pelosi (D-Calif.). McConnell declared: “We have to work together. We need to improve the health care system in American because it’s not working well.”

.@senatemajldr: “We have to work together. We need to improve the health care system in American because it’s not working well.” @dailybriefing pic.twitter.com/7vtnj3BVZ5

In a news conference on Wednesday, Pelosi said that voters on Tuesday “went in a new direction” and “delivered a resounding verdict against congressional Republicans’ attacks on Medicare, Medicaid, and the Affordable Care Act and people with pre-existing conditions.”

”It ended up politically being a godsend for Republicans,” McConnell said.

.@senatemajldr: “I do think voting against Kavanaugh was a mistake.” @dailybriefing pic.twitter.com/zGxqpx1nfa

What do you think about Senator McConnell’s comments about the election results. Do you believe that the votes against Kavanaugh sealed the fate of the senators who lost their elections?